Okay, I already know what you might be thinking here. “Dear God, another game based off a TV show which is already a rip of 64 different cop and law dramas?” Of course, you could be right here, but let’s at least allow GameHouse a few moments to impress everyone before launching into an array of questions and criticism about the subject matter, or what this title could possibly even hope to achieve. Surprisingly, there’s a bit more lurking underneath the murky surface for NCIS: The Game from the TV Show. 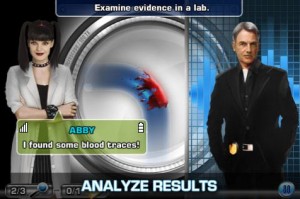 While struggling to ignore any preconceived notions about NCIS, the game opens up to the show’s main theme song and a coolly posed photo of the agents. Five unique scenarios with cheeky names such as “Date with Death” or “Phone Tag” are the meat and potatoes, throwing you into a crime scene and storyline similar to the television show. As the clues are revealed, players follow the agents and lab scientists to everywhere from murder scenes to the interrogation room while attempting to solve the case. Each of the main characters is utilized as a vehicle for carrying the story, which advances as you successfully solve each puzzle.

NCIS is somewhat flat looking, with digitally rendered versions of the characters standing inanimately as their mouths move during text dialogue. Most of the scenes consist of examining a piece of evidence or searching a room for clues, as you tap around for that stray hair or bloodstain to crack the case. The mini puzzles take players into the lab to match blood samples or frayed wires, most of which play pretty smoothly. The scenes are at least pretty well put together, but there isn’t much in the way of animation or exciting graphics. 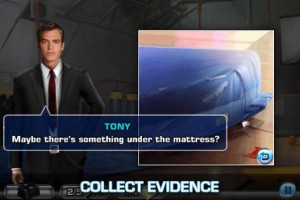 While the theme song is an obvious choice, the game consistently pipes in an assorted soundtrack, which varies depending on the situation. Interrogation scenes, mini puzzles, and dialogue between characters all trigger another song, which attempts to keep the action moving as swiftly as possible. There aren’t many effects, but NCIS is a mystery/puzzle title, not Halo 3, so the expectations should be fairly limited.

See the clue, tap the screen. Flip between colored threads, tap the matching fabric. This is essentially the extent of the game’s control, which isn’t really a negative point. The whole setup almost reminds me of the older Escape from Monkey Island titles, where players are given a scene to essentially click around and find the necessary pieces to solve the puzzle. 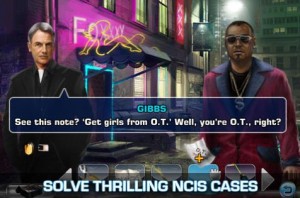 GameHouse definitely pulled me into NCIS further than I initially expected, but with only five cases to solve, the playability is super limited. Some might take around 20 minutes or so to complete, but the replay value is almost nil, unless you want to improve your efficiency score, which is determined by how smooth your detective work is. Also, for $4.99 there are absolutely some deeper, more entertaining titles in the growing iTunes pool. Devotees will probably love this, but casual fans might find themselves a little bored after a couple puzzles.