“I won’t be ignorrrred!” howls from the iPhone while rocking with Tapulous’ latest in the Tap Tap Revenge series, this installment featuring alternative rock/rap heavyweights, Linkin Park. Liquid smooth graphics, lightning fast action, and ten songs from the band kick off yet another fiery release from the tap crazy masters themselves. Just how finely tuned is your hand-eye coordination? Linkin Park Revenge will try its best to put you to the test. 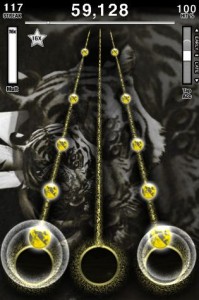 Tapulous utilizes their usual tools and tricks as a base for their latest title, while adding yet another layer of intricate gameplay and visual appeal to keep people coming back for more. Even though they’ve released a number of similar titles, by creating unique versions featuring one particular artist, the concept keeps undergoing assorted visual and auditory facelifts. Of course, this works much better if gamers are fans of the chosen group, creating somewhat of a double-edge sword effect, especially with a somewhat polarizing band such as Linkin Park, which people tend to either love or hate.

The general structure is similar for Linkin Park Revenge, utilizing the familiar circles at the bottom, with lines stretching out to the vanishing point, dotted with colored orbs signaling when to hit each of the circles. A number of shape shifting, trippy backgrounds swirl around during the tracks, sometimes resembling tigers, Linkin Park symbols, faces, and various cover art. The action is fairly busy, but not particularly overwhelming, as the graphics stream along to keep the game moving along at an intense pace. 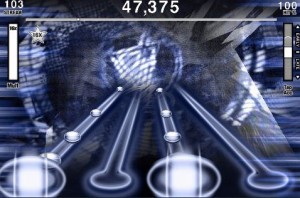 Ten songs provide the soundtrack for gamers, including “The Catalyst,” “Blackout,” “Numb,” “One Step Closer,” “Waiting for the End,” “New Divide,” and more. The game initially features only two tracks, but the rest can all be downloaded for free, so don’t freak out just yet. Everything is crisp and smooth, with the only interrupting sound effects slashing through when players foul up a note or two to throw off the musical explosions.

As with all of Tapulous’ titles, this rests solely upon the ability to hit each of the circles at precise, accurate times in order to rack up insane point totals, combos, and streaks. Occasionally it can become quite difficult, but this also depends on which setting you’re playing on. The lower levels are almost too simple, while extreme is so wild it’s almost impossible to discern which button should be hit when, throwing players into a desperate tapping frenzy to complete the song. 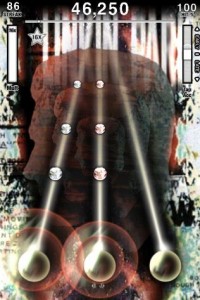 Another well executed title in the Tap Tap series, but this somewhat pigeonholes the audience, as Linkin Park isn’t exactly a classic group by any stretch of the imagination. If you’re a fan, the choice should be pretty obvious, otherwise, it might be a little tougher to work through this one.