Remember that old racing arcade game with the pedal and the steering wheel that would spin forever? You could see the entire track and your little car would zoom around it and inevitably crash into a wall.  If you still don’t know what I’m talking about click here as it is a good example. Well imagine a new and improved version of that game on your iPad. 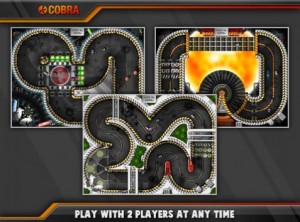 Danger Derby is the newest version of a classic racing arcade game. Danger Derby has four different types of gameplay ranging from the standard Arcade Mode, where you race to upgrade your car, to a Freeplay Mode that allows you to pick the track, the amount of laps, and number of opponents. Personally my favorite mode is the Challenge. It’s you against a ghost car, you continuously drive around the track trying to lower your time and beat the ghost achieving a gold star. The final mode, which is only available after it is unlocked, is the Mirror Mode. Once unlocked you can flip all of the tracks to give you even more variety.

Along with the four modes, Danger Derby serves up quite a few amazing tracks each with 3 difficulties. The tracks start out with a simple oval but grow increasingly difficult with more turns and obstacles.

Danger Derby does offer a multiplayer mode but its local play only.  I found it hard to play with two players because I like to hold the iPad when playing and not have it laying flat on a table, which is really the only way it can be played with two people. 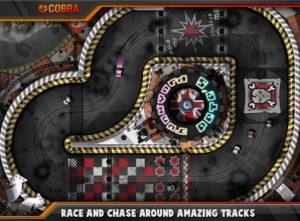 The graphics are great. They are sharp and vibrant. I really like and respect the way that the game is visually setup like the old school top-down arcade game but updated and upgraded in a way that really makes the game pop. Adding to the poppiness (I know that’s not a real word) of the game, the music is perfect driving music. Most of the songs have a quick beat with lots of guitar. Hearing songs like this makes you want to put the top down and hit a country road.

The gameplay controls are all button based with the turn buttons on the left and the accelerator and brake on the right. The controls do take a few races to get use to but once you get the hang of it it’s like riding a bike. 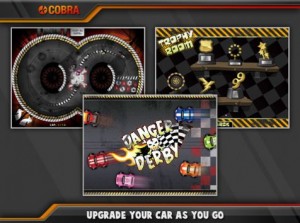 There are a few things that I would like to see in future updates including more tracks (honestly you can never have too many tracks). Online multiplayer would be amazing addition for this game as well.  Even if the multiplayer wasn’t in real time but you could upload and compete against other player’s ghosts it would add quite a bit to the gameplay.  With these additions I wouldn’t think twice about the $4.99 price tag. As the game is right now, five bucks seems a bit much to ask.