The makers of the exciting, pleasantly cartoony Fly Kiwi, Fly are back again with another installment in time eating entertainment with Sir Lovalot. Take control of our dashing hero while bounding skyward up the Infinite Tower in search of love, and an insanely high point total. Essentially another take on a tower jumping game, Sir Lovalot does its best to keep gamers entertained and visually stimulated while avoiding traps and racking up new point totals. 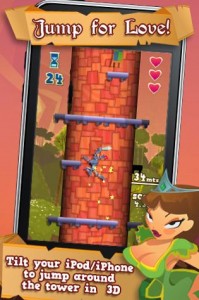 Strap on your medieval knight armor and get ready to fly, as Hungry Game’s latest title features tons of skyward jumping through a variety of traps and power-ups. However, the initial problem seems to be this is all Sir Lovalot is prepared to deliver for gamers. After kicking off, you tilt the device either direction to control his leap, while dodging spikes or flames and attempting to string up combos and collect items. The platforms vary from trampolines which rocket Sir Lovalot towards the heavens, while others are cleverly disguised traps that send our hero to his doom.

The graphics engine has a pleasantly smooth, soft edge, as the tower rotates seamlessly while navigating your way towards the top. Each of the platforms is slightly different, but some can be fairly difficult to detect, especially when the game speeds up after surpassing the first few levels. Sir Lovalot flips all over the place while tossing his sword in the air, putting on an acrobatic display during successful jumps, and grabbing his rear in despair while landing on a razor sharp spiked ledge. The “Ye Olde Scoreboard” displays your current high scores, while the “Ye Olde Collectibles” screen shows the various items collected, including boxer shorts and magic eggs (although I’m not sure what they’re really for). 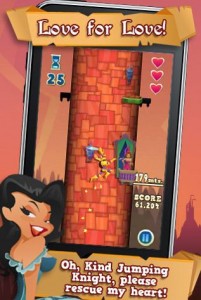 Sir Lovalot’s opening titles boast an appropriately medieval themed track, with plenty of horns and airy percussion, fitting the game’s theme perfectly. Although, during gameplay this inexplicably disappears, replaced by intermittent sound effects and catch phrases spouted from our hero, ranging from “All for one, and one for all” or “Up little buddy!” Various springy “boing” noises emit with each bounce, which slowly play “Do-re-mi” while stringing together a lengthy combo.

Hungry Game is one of the mobile game developers who seem to understand the device’s limitations when it comes down to controls. Instead of forcing a title which really needs a full controller and joystick onto everyone, they utilize the iPod’s strengths instead of trying to overstretch its capabilities. Simply tilt left or right at varying angles, and Sir Lovalot responds accordingly. No fake touch screen joysticks, confusing multi-button arrays, or ridiculously sensitive mechanisms here. 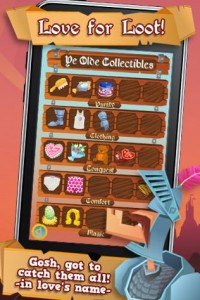 While the original release appears fairly limited in content and sound, Hungry Game is already developing updates including new enemies, themes, and towers. I’m curious to see how far they can take this one, although for the $0.99 tag Sir Lovalot held my attention pretty well.