The Time Bandit, Northwestern, Wizard, Cornelia Marie and company are all on hand for Hands-On Mobile’s adaptation of Discovery Channel’s Deadliest Catch. From throwing the hook to stocking up on various bait and equipment, this takes gamers from Dutch Harbor to the freezing, unforgiving Bering Sea while on the quest for King and Opilio crab. Even though you won’t quite feel the stinging cold ocean wind, the only aspect from the series this title seems to be missing is Mike Rowe’s near-perfect narration. 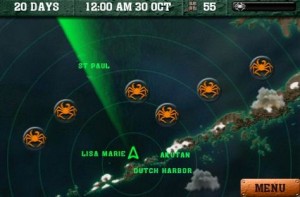 Deadliest Catch is a fairly straight forward concept, consisting of preparing your vessel, hiring a crew, locating the fishing spots, then setting and pulling strings of pots to meet a designated quota. Most of the action is tapping and dragging throughout a series of mini games to throw the hook or sort crab, which determines various factors such as morale and experience. Over time, your money, equipment, and crew grow, which ultimately depends on what type of attention span and patience you have for the somewhat repetitive mini games.

The majority of the game is spent navigating on a map-like layout of the Bering Sea, laying out strings of pots while attempting to locate the elusive crab. There aren’t any spectacular graphics here, but at least everything is set up fairly well, making it pretty feasible to navigate the sea and locate fishing areas across the ocean while avoiding ominous storm systems and ice flows. Each of the mini games is more rendered in 3D, but it quickly becomes repetitious while staring at the same handful of animations over and over. 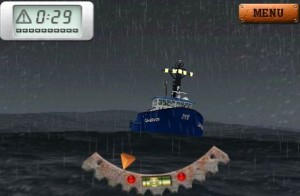 Each of the menu screens boast a chillingly familiar tune, which is about as close to Bon Jovi as you can get without paying some sort of exorbitant licensing right. In game, everything is fairly quiet, with the exception of some minor sound effects while sorting crab or throwing hooks. However, Hands-On was on the ball by allowing gamers to set up an iTunes playlist right from the options menu, which is far better than any audio offered by the title itself.

While there aren’t a ton of quirky or complex controls, Deadliest Catch still manages to throw up a few “What in the world is going on here?” moments. Occasionally on the assorted menu screens, the buttons refuse to respond, even while emitting signal noises acknowledging your touch, but standing still like a stubborn mule. Throwing a life preserver or hook is pretty hit or miss too, as it seems to sail all over the water without much rhyme or reason. 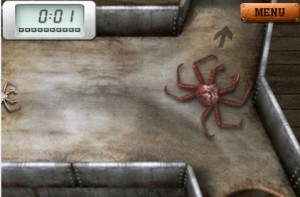 Even though this title is obviously aimed at obsessed fans of the inexplicably popular television series, the overall concept is generally entertaining as far as basic adventure titles go. The issues with control seem to be general bugginess so it’s foreseeable this could be fixed with a quick patch in the near future. Despite complaining a bit about the oft tedious mini games, I still found myself tapping away at this one for much longer than I anticipated, so there’s a clever attraction to keep on fishing for hours on end.