There’s sim titles for managing a supermarket and paper football, so why not professional fishing? Gas up the boat, grab the tackle box, load up the cooler, and prepare for some high torque competition in pro fishing tournaments at a variety of locations with a ton of unique gear. Unlock new equipment, keep track of records, and load up your trophy room to the point where Kobe Bryant would be embarrassed. 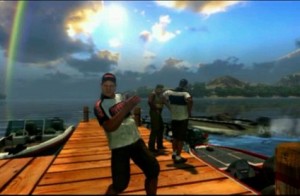 Within the first few rounds of fishing, Rapala Pro Bass Fishing distinguishes itself from simple time waster apps by presenting a full console game experience. With the amount of options and over 25 different tournaments, the playability is crazy for a mobile game, especially with the added “free fishing” mode which allows gamers to tool around the lake doing whatever you please. The fishing hotspots are all real locations, and Rapala includes a bounty of fish to chase down, while simultaneously keeping track of all your records and pertinent fishing data.

The menu screens are all cleanly laid out in blue and red with detailed backgrounds, allowing players to select their next peaceful lake conquest. While cruising around in the boat searching for the next fishing hole (which is marked with a brightly colored circle and arrow, so you can’t mess this one up), the graphics are slightly choppy, and the boat looks like its sliding across ice similar to a hockey puck due to a lack of substantial texture in the water. Fortunately, the fishing sequences are a little better, as you attempt to properly time reeling in the lure in order to attract the next smallmouth bass to land in the boat. Assorted fish skirt across the bottom of the lake, along with brightly colored plants and other sea life. 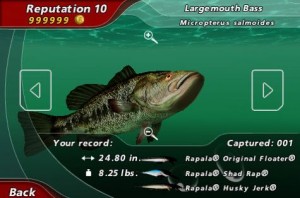 Rapala sticks to the console theme with their sound effects, which paint a nice portrait of a day on the lake fishing, sans the stinky dead fish smell, which is a plus. Pleasant chimes indicate a correctly hooked or landed fish, while a background voice booms “Niiiiice!” or “Great!” after a particularly slick cast or catch. While reeling in a fish, a MIDI-esque rocking song abruptly blurts through, interrupting the calm waters and chirping birds, which was a little weird.

So how exactly do you reel these monsters of the sea in, you ask? Activision absolutely crushed the control on this game, as far as the fishing aspect goes. Nearly everything is done by tilting or flicking the device, such as yanking towards yourself to set the hook, or tilting left and right to keep the fish on the line. To operate the rod, a circle on the right side allows you to reel in a counterclockwise motion at varying speeds, depending on what the situation calls for. The only piece which is a little quirky is steering the boat, as I was flying all over the place in zig zag formation like a drunken sailor most of the time, despite trying to keep a steady hand. 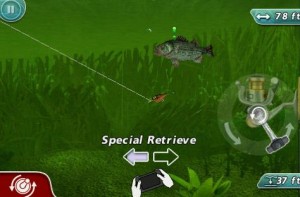 Even though Rapala doesn’t boast the cheapest price tag, Activision provides gamers with a literal boatload (pun intended) of content and tournaments. After playing periodically for days, I had still barely cracked the first few lake stages open, so playing time is the last aspect people should concern themselves with on Rapala. Don’t pass this one up if you’re even the least bit interested in fishing titles.