The Earth is in dire straits. Our planet is failing, and mankind is facing certain extinction if we aren’t able to protect what we have left of our crumbling society. The only solution is to…fight off some bacteria attempting to infect our incubators? Yes, this is the premise of Cosmonaut Games’ Inkub, which pits gamers against a horde of virus laden organisms while fighting to keep them from contaminating the precious incubated eggs. 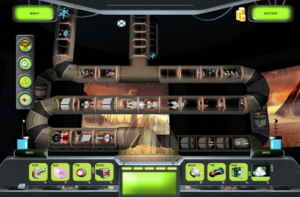 Storyline aside, Inkub utilizes something awfully similar to the avalanche of tower defense style strategy games which continue to spread throughout the mobile gaming market. A variety of twisting, transparent carbon tubes lead towards the vulnerable incubator, and as organisms try to float their way down, gamers can place various weapons, traps, and explosives to destroy the enemy. Upgrade the energy towers to generate more income, which allows you to purchase more turrets, or upgrade and repair the existing ones. Start furrowing your brow, because this is starting to sound suspiciously familiar to TapDefense, Bio Army, 7 Cities, and you get the picture.

The entire sensory experience during Inkub is appropriately geared to a space age, futuristic motif. Brightly colored carbon tubes twist down towards the perilous glowing egg, as cartoony looking bacteria work their way down the tube at an increasingly quick pace over time. Spinning the view from front to back (as there are tubes on both side which need accounting for) is pretty fluid, as the machinery emits steam after completing the motion. Units begin to slowly turn red while taking damage, signifying a turret’s impending explosion and an enemy’s nearing demise. 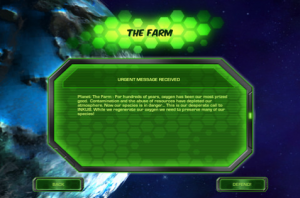 Pairing with the lush, starry background graphic, a dramatic, classically inspired track plays, attempting to pump gamers up for the upcoming viral challenge. Another more electronic, eerie track sails from the speakers during game play, which is dotted by an assortment of machine-like noises including bursts of steam, beeping detonation timers, and exploding mines.

An easy advantage the majority of these games possess is the incredibly easy and simplistic control schemes. Click on the desired weapon or tool, and tap onto the selected target. Flick left or right to rotate the view, and continue the seemingly never ending battle against the purple, green, and tan germs of war. 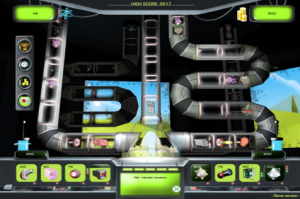 With about 40 levels, survival mode, bonus rounds, a ton of unlockable weapons, and the ability to save multiple files easily, there’s certainly some positive attributes for Inkub. Unfortunately, under the occasionally bright surface, it’s really an incredibly tired and overused concept applied to another mildly engaging storyline. If you’re into the strategic tower defense titles, Inkub certainly has enough to keep you entertained, otherwise let’s move on to something a bit fresher.