A relatively simple construct, Japanese inspired animation, arcade style gameplay, bouncy music, and sushi falling from the sky? Yes, these are your primary ingredients from Wefiends’ latest mobile creation, Sushi Boy. Packed with lightning quick playing speeds, upgrades, and achievements, this is a highly simple, yet effectively executed title which aims to trap players into some entertaining, speedy action. 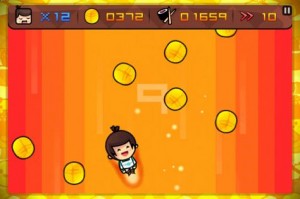 The overall concept is about as easy to understand as elementary school addition, which pits the players’ character equipped with a bucket and tasked with catching various sushi dropping from the heavens. Dash from left to right and snag as many pieces of sashimi, sushi, and dumplings as you can, while avoiding traps such as fish hooks, bombs, and turds, which cause you to fall asleep. Each missed piece of delectable raw fish missed costs one of your ten lives, while stringing together combos multiplies your score and adds precious coins, which can be used to purchase add-ons and powerups.

Everything is pleasantly rendered in a soft, anime-like style, and pasted upon stylish backgrounds ranging from Japanese mansions to graveyards. Your character seems to be grinning like an escaped mental patient for the duration of the game, as he dances back and forth while collecting shrimp shumai, maki rolls, and various pieces of sashimi. A quaint, simple display bordering the top of the screen displays current lives, coins, and score, making it easy to keep track of everything. After pulling off long strings of consecutive catches, the screen flashes various colors as your point total continues to score, while a missed piece of sushi turns into a shrouded sushi boy ghost. 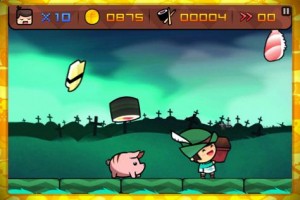 The soundtrack clearly dominates the audio component of Sushi Boy, with pumping, yet light hearted techno driven music and plenty of midi synthesizing weaving in and out of the soundscape. A little pop noise signals a successfully caught piece of sushi, while a loud succession of pings erupts after each lost life. Soft, keyboard driven tunes accompany the option and upgrades screens while you shop for hats, pets, and new levels to play on. While Wefiends didn’t include an option to utilize your iTunes library, at least the music isn’t completely obnoxious, and actually fits the game’s cheeky persona.

Players are given two options for control; tapping on the screen, or tilting the device, each with their own set of minor, yet apparent quirks. Whichever you select, it will take a couple rounds to become comfortable, although after the action really picks up, the slightest misstep can cause you to lose three lives before having a chance to recover. A double tap sends the sushi boy racing across the screen, while a single press initiates slower movement. Tilting the iPhone works similarly, with sharper turns producing quicker reactions from our valiant rice and fish collecting hero. Both methods function well enough, but your margin of error is razor thin, which can be fun or frustrating, depending on what type of player you are. 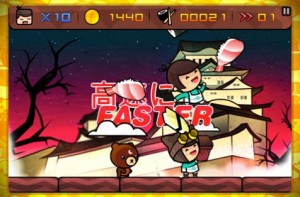 Dart back and forth, collect Japanese delicacies, amass a haul of coins, purchase silly upgrades, and continue the fish frenzy until you can’t stand it anymore, or develop a hankering for an order of shrimp tempura. For a cheap price, Sushi Boy delivers some light hearted fun, catchy tunes, and allows plenty of room for possible expansion down the road.