Does everyone remember Punch Out? The fond memories should come rushing back, as people mashed buttons for hours on end with the now dust covered NES system while struggling to take down the next opponent. Take the layout of the original boxing classic, transform it into a humorous samurai story, add in horrendous gameplay, a nonsensical training system, and enemies which are completely impossible to beat, and you’ve landed smack dab onto Ninja Junk Punch. 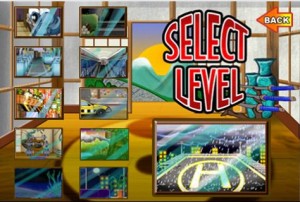 So our lumberjack protagonist strolls into his humble abode after a sweaty day of chopping wood to find a sneaky ninja in bed with his wife. As his blood begins to boil, players take on a variety of foes, and for whatever reason are tasked with “junk punching” the evil into submission. This essentially consists of picking one of the buttons and pressing as fast as humanly possible before they have an opportunity to retaliate. There’s some sort of training option, where you can improve attack, defense, or health attributes, but Snow Day Games didn’t bother to quantify anything, so figuring out your current level is impossible.

One of the redeeming qualities is the comical art, although most of the game is essentially devoid of any sort of animation, other than the sprites slowly moving back and forth during battle. Enemies’ faces wince with pain while receiving the next right hook to the nads, while the backdrops change for each battle. After each successful mission, a new cutscene in the disjointed story rolls by, featuring some well done drawing which utilizes a nice blend of anime and cartoon characteristics. 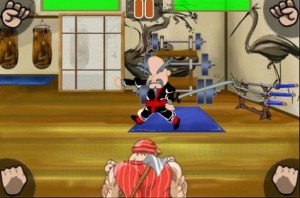 Wispy Asian melodies attempt to soothe your frustration during the menu screens and battles, with flute melodies and soft string rhythms, laced with some electronic beats. The effects are your typical Batman-esque “biff,” “pow,” and “smash,” while little sword sounds pop from the speakers while making selections on the menu.

The control is flaky at best, especially since blocking and dodging blows is executed by moving the device, which of course doesn’t always work how it should. Compacting the situation is the outrageous difficulty of even taking down the second enemy, who for whatever reason can wipe out over half of your precious health bar with a single slap to the sac. The attack buttons are in each of the four corners, with hooks on top and jabs on bottom. I suppose you can alternate and attempt to utilize some sort of strategy, but for the most part it didn’t really seem to make the slightest bit of difference. 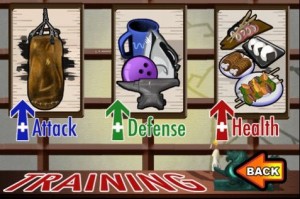 While the graphics and sound were fairly decent, it feels like Snow Day Games forgot about the whole gameplay and control element of developing a mobile title. You could keep trying to seek vengeance against the evil ninjas, but chances are the app will just crash right in the middle of everything, which is pretty much the final straw. Do yourself a favor and download a free app, or just punch yourself in the junk; either option will last longer than this one.