A recreation of a 1930’s pinball classic, Ballywoo attempts a digital interpretation of one of the first mass produced pinball machines in existence. Published by Vision Thing and available in the iTunes Store for $0.99, this is a stripped down, back to basics app which loses any of the filler and simply delivers the advertised product, Ballywoo. Forget about all of the bells and whistles on contemporary pinball, million point bonuses, and insane, other worldly story lines, this is something lifted right out of history. 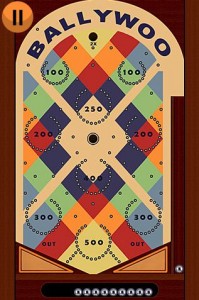 While Ballywoo is considered one of the grandfathers of modern pinball, this is incredibly different and much simpler, as players only launch the ball and watch the action unfold. Without paddles, the ball bounces off a number of metal pegs, and hopefully lands in one of the horseshoe shaped areas, each with different point allocations based on the difficulty level. There’s a 2X multiplier which players will need to hit in order to top high scores, as well as another hole in the middle of the board that costs one ball.

The playing area is somewhat of an argyle design, with assorted colored diamond shapes providing the backdrop. Ballywoo is emblazoned across the top in bold blue letters, as the entire board appears as if it’s been set inside a wooden border.  Players’ remaining shots are represented at the bottom of the screen, with the launching chute towards the right.

This might have the smallest amount of sound content in the history of mobile games, with no soundtrack and around five unique effects. A wood block sounds when a ball hits the “out” area, a slight metallic ping signals a bounce off one of the pegs, and a little jingle sings after each round. While there’s no in game menu to play music from your iTunes library, it’s still possible by making a selection before loading the app.

While in-game, launching the ball is done by flicking, and the force is determined by how fast you move your finger across the screen. It’s also possible to bump the table by shaking the device, in order to land in higher scoring areas and avoid the “out” spots. 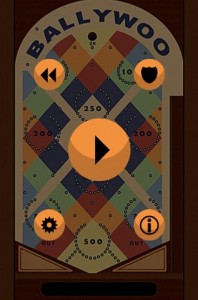 Ballywoo provides some easy to follow, basic fun, without attempting to rehash and redo an antique game which inspired legions of pinball tables for years to come. The only major issue here is Vision Thing attempts to charge people $0.99 for something which should absolutely be free. Trying to preserve the 1932 original is one thing, but expecting people to pay for a game which barely has any content whatsoever is a bogus deal.