Step into a time machine and blast off into ancient civilizations from centuries past. Arm yourself with spears and arrows to beat the enemy into submission while satisfying your thirst for complete conquest and control of the battlefield. Chillingo Ltd’s Civilizations Wars allows gamers to wage war against competing tribes while working your way North to retrieve the falling star which contains legendary knowledge and power. With a variety of scenarios, spells, and game options, this is one strategy title capable of keeping players locked in for hours on end. 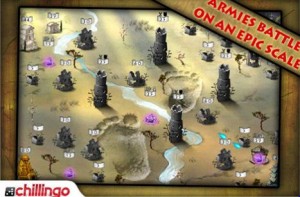 First off, it appears the developers at Chillingo Ltd spent far too much time (as did I) playing Age of Empires years ago. Civilizations Wars isn’t necessary a copycat, as it’s far more simple and streamlined, but still utilizes a similar real time strategy engine, ancient storyline, and archaic battle techniques. During each stage, the warring factions begin on opposite sides of the screen, and attempt to take over each of the structures on the map. The amount of troops you deploy to an uncontrolled target must outweigh the soldiers housed there in order to convert into an allied unit. After each completed mission, your experience points rise, and with each level, players are allowed to upgrade assorted skills or magic abilities to improve the tribe’s overall strength. Cast spells, take over buildings, amass a large army, and smash the enemy; plain and simple.

Each level is laid out neatly, with various structures dotted across the brightly colored landscapes, all with a number signaling the amount of troops necessary to take over. Unoccupied units are grey, while controlled towers and houses correspond to the tribe’s given color. When dispatching soldiers, a group of lightly armored sprites shamble across the battlefield, entering the target in hopes of securing a larger piece of the pie. There are more than enough levels, each with their own design which includes everything from streams and rivers to trees and mountains. While casting spells, fireballs, meteors, and bolts of white lightning crash down from the sky, signaling the gamers’ god-like strength. 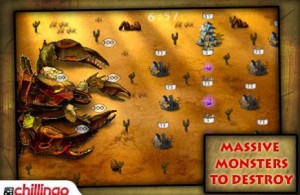 During the menu and in game option screens, Civilizations Wars emits a softer, tribal inspired soundtrack, complete with unique percussion and airy flutes. While playing, a variety of ambiance effects and other sounds emit from the speakers, which are quite frankly obnoxious. Yes, of course you can turn them off, but the repetitious bird calls and tweeting becomes annoying after about 60 seconds of gameplay. When casting a lightning spell, the same cartoony zapping sound plays over and over, which becomes grating after about the second time. After assigning troops a target, they shout inaudible jibberish, and before long, you’ll probably find yourself playing Civilizations Wars on silent.

Control is simplified, requiring players to tap and drag from one building to the other, which prompts a squad of soldiers to charge the designated target. The same strategy works with casting spells, as a colored circle pops up on the screen, allowing gamers to easily strike the correct building. My only issue is the game’s tendency to occasionally force players to group more than one unit for an attack, as each one your finger drags across is automatically selected due to close proximity. 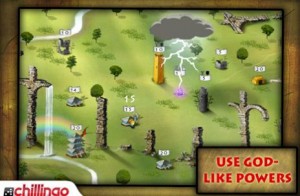 With a boatload of playable scenarios, upgradeable skills, and a host of magical spells, Civilizations Wars easily blows its $0.99 price tag out of the water. The difficulty can become quite challenging at points, but determined gamers should be able to achieve dominance after a few tries. Turn the sound down a bit, and this one’s an easy pick.