Table Twister is the newest multiplayer game from the developers at GameHouse . To download this game you will need to search for Table Twister, however the game really consists of three mini games combined under one roof. Each of the mini games has a different theme, but they all share the same gameplay style and controls. In fact, all of the games are “drag and drop” based games where you and the rest of the players (up to four total) will compete over game pieces from a rotating game board that lies in the middle of the screen. 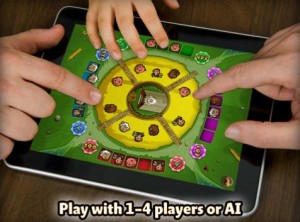 Each of the games are simple enough to be played by fairly young kids as long as they understand basic spelling and the basic winning hands in poker. There is one game that is entirely targeted for youngsters and that is the Rancho mini game. In Rancho, you try to collect as many like animals as possible before the time runs out. As you collect the animals you must hit an enter button to lock in your animals, they will then disappear and you can start collecting more. Rancho is not much fun for adults, it quickly turns into whose fingers move faster and that gets boring pretty quick.

World List is a Scrabble-like game where you must spell out a three- letter word, a four-letter word, and a five-letter word in order to win. You have to be the first person that completes their words and locks them in to be the winner. Again, all players draw from a rotating communal game board. 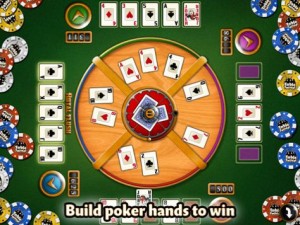 The last game is the poker-based game, Rolling Poker, where the players try to create the best hands possible. Each hand is designated a points score and whomever has the highest score when the timer runs out wins the game. It’s pretty simple for poker players, but the real challenge is collecting the cards you need before your friends do.  Here’s a hint, most players go for the high cards but even 2’s and 3’s can make a four of a kind. 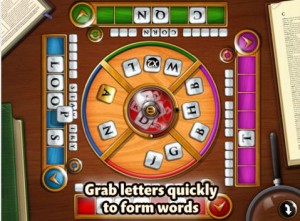 All three mini games are super fun (depending on your age) but the downside is that you can only play them with other people. There’s no computer to compete against, no clock to best, no nothing. However, if you have younger kids who love to play with your iPad/iPhone this game is definitely worth a look. It’s $1.99 on the iPad and $.99 on the iPhone.

Just a note regarding the iPhone version – don’t buy it. To have fun with multiple people playing you really need a bigger screen.