Our 2010 iPhone Game of the Year has embarrassingly enough not even been review by iPhone Gamer Blog.  In fact, it has mostly escaped the notice of too many iPhone review websites (although there are a few exceptions).  The game is called, Game Dev Story and it was created by small-ish Japanese studio, Kairosoft.  If you haven’t heard of it, it’s a simulation game where you take on the role of a video game company that goes from the early eras of console releases until the modern day of consoles (PS3, XBOX 360, etc). 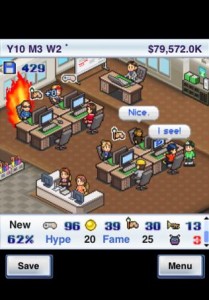 Your job as the head of the game studio is to make games that mix genres and level up your studio employees so you make the best games and get on the list of Top 10 game releases.  Throughout the years you will also have the ability to win awards for Best game, Worst Game and many more.  The choices you make when you release a game and how much marketing you put into it truly affect the outcome of how many people buy the game.  I spent no less than 10 hours playing Game Dev Story and occasionally played for 2 or 3 hours at a time.  It is a darn fine game. 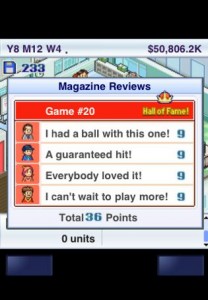 The question many will ask is, is this game truly better than the other 2 games in iPhone Gamer Blog’s top 3?  I think it depends on what kind of gamer you are.  But if you are looking for value and fun for your dollar, I think this game is definitely on top.  Clocking in at only $3.99, you will have a ton of fun, be able to play it over and over again and as long as you have a bit of imagination, be able to easily insert yourself into the role of game studio CEO.

Our top three games are rounded out by Grand Theft Auto: Chinatown Wars and Baseball Superstars 2011.  Grand Theft Auto: CW by Rockstar is simply an amazing achievement.  Coming out near the beginning of 2010, no game showcases the iPhone platform better and no game has a fuller storyline.  Coming as a direct port of the PSP version, the city is fully realized, the graphics are tremendous and the details while driving and walking around (including fog, broken headlights, etc) all add to the awesomeness of the experience.  If you love GTA games and don’t mind the top down, isometric experience, you will absolutely love this game.  For some, the controls are hard to get used to but for anyone that enjoys iPhone gaming, the controls can be picked up in just a few minutes. 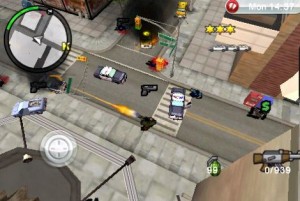 I spent more time with Gamevil’s, Baseball Superstars 2011, than any other game this year – probably 20 hours.  Playing “My League” mode I went through 8 seasons two separate times and each time retired a “Hall of Famer”.  The game is fantastic for mixing two different genres – RPG’s and Baseball.  The developers obviously are into baseball but they are just as into telling a story.  That’s fun.  My only complaint is that the story didn’t last long enough and the girlfriend’s storylines were pretty cheesy.  Nevertheless, if you a baseball fan and like the idea of a My Player mode in Sony’s, The Show, or 2k’s, MLB2k10, this is absolutely your best option on your favorite mobile gaming device. 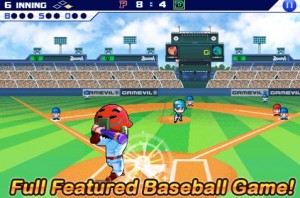 Coming back to Game Dev Story, this game doesn’t have great graphics, amazing music or a complicated gaming world but things feel right.  As you play through the game, every time things start to feel a bit stale something in the world happens to keep you interested.  A new console is released or a gaming show comes up that necessitates you to make a decision on who to send and how to promote your game company.  Things like this pop up regularly throughout the experience.  That kind of thing keeps you away from the mundane.  It makes the game very easy to open up and continue because you want to come back to see what happens next.  That’s the kind of game more developers should copycat.