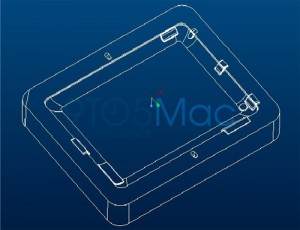 At least it seems.  After all, there are pictures all over the net that have been confimed to be real by the take down notice (no one knows from whom) the sites received that posted them.  The pictures look like they have been drawn on the back of a blue napkin with Wite-Out or something.  Then again, maybe someone just drew them with the same artistic talent I have (none).

In all seriousness, the diagram is apparently based on a molding of an actual iPad 2 case.  The above picture is deceiving apparently (or at least one would hope) because it looks like the new iPad will be roughly the same thickness of a 1990 IBM laptop.  Obviously it is not drawn to scale.  The only thing of interest is that it looks as if the device has a slot where a USB port could be or at the very least, an SD card.  That is big news and a departure from all previous non-computer Apple devices.  A card slot like this would allow for easy picture transfer from a digital camera.  A USB slot would allow for a keyboard, a mouse, or this USB-based coffee warmer.  Time will tell if that’s the case (Case – get it?  Word play is hilarious).

The good news for all of us is that Foxconn, the manufacturer that handles Apple’s device manufacturing, seems to have more leaks for the public than Julian Assange.  I fully expect that we will get to see the iPad 2 well before the actual release by Apple.