The dating scene got you down? Sick of weird parties you hate and crowded bars filled with people you don’t feel like talking to? Tired of being ordered around and answering your current girlfriend’s beck and call 24 hours per day? Well, have no fear, as WET Productions Inc. is here to quell your woman woes, be they real or imaginary, with My Virtual Girlfriend. This dating simulation app is capable of taking people to new heights, or new lows, depending on what kind of potential womanizer you might be, all for the cheap price of just 99 cents. 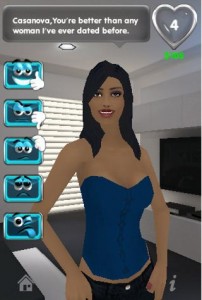 Similar to some sort of Cosmopolitan magazine quiz or an online dating site, My Virtual Girlfriend kicks off the action with a series of questions to determine your ideal match. After rating yourself in various areas including sensitivity, health, personality, intelligence, and so on, the game also polls your preferences for an ideal digital woman. Hair color, body type, and complexion are all customizable, and after completing the preliminary steps, the game generates three girls to choose from while presenting their personality traits to make the decision as painless (or painful, depending on how you look at it) as possible.

While attempting to spit some digital game to your newfound mate, My Virtual Girlfriend presents a decently rendered female with a series of options along the left side of the screen. Choose from actions, activities, talking, or touching to attempt to fill up the heart meter in the top right corner in order to level up and unlock new abilities. Aside from occasional choppiness and the fact that the girl’s hands look like giant oven mitts, the sprites are pretty well done, and respond with a variety of facial expressions and body language to your actions. 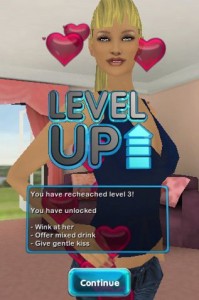 During menu screens and activities, the game plays the same electro-poppy song which reminds me a little of a remix of some pop single you might have heard in the late 90’s. While all of your mobile girlfriend’s comments are subtitled, her speech is in another language, which can become a bit tiresome, especially since whatever sexiness there might be in her voice is lost in translation.

As the relationship progresses, players are given a number of options to increase or decrease their chemistry with the digital damsel, which can be tapped quickly on any of the menu screens while playing. The touch option allows you to poke her, which can result in a number of unique reactions, depending on your current level and where you choose to touch. Keep clicking the right choices, and your relationship level will inch higher as you reach the hot tub, a strip club, or love, whichever sounds more exciting.

While most of the dialogue and activities seem to function correctly, there’s an inherent contradictory nature to your newfound digital mate’s behavior. For example, she might suggest that she loves hiking and kayaking, but if you drop hard earned imaginary dollars she’ll only complain about having tired feet or wet hair. I suppose this could be accurate in real life as well, but the confusion pops up all too often for the conversations to completely make sense. Depending on her personality, the women also have a habit of spouting ridiculous pick up lines which sound like they came right out of The Ladies Man, which aren’t too humorous after the second or third time. 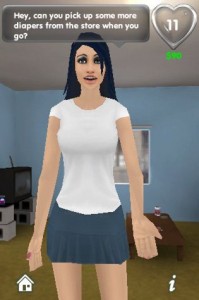 My Virtual Girlfriend is pretty much exactly what the title implies, although the inconsistencies in conversation and occasional glitches don’t really make for liquid smooth gameplay. I suppose this could be an entertaining diversion, but somehow I couldn’t help but wonder how people’s time might be better used tending to their real girlfriend, or finding a woman that’s more than three inches tall.