A perfectly titled game considering the current state of domestic and overseas economy, Greedy Bankers is one of the latest puzzle titles to grace iPhone users’ super-sensitive screens. Fast paced and quick moving, this game from Alistair Aitcheson draws influence from more classic titles such as Dr. Mario, Bejeweled, and Diamond Mine, as piles of gleaming jewels drop onto the screen for your grubby hands to collect. Armed with a keen eye and a propensity for hoarding all the cash in sight, players will find themselves acting like a kid in a candy store once entering the vaults within Greedy Bankers. 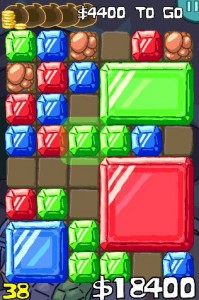 The gameplay is certainly no head scratcher here, as a number of glistening blue, green, and red stones fall onto the screen, urging you group them together to multiply your score and clear the assigned total. A timer slowly ticks away towards impending doom, causing gamers to frantically tap and drag the jewels all over the place to clear the next hurdle. Bonuses are occasionally given out for finishing extremely quickly (i.e. 30 seconds), and each level replenishes the precious time while increasing the necessary dollar total. This wouldn’t be a puzzle game though without a few teeth grinding obstacles, which include immovable boulders and bank robbers who run amok while thieving your precious jewels.

There’s a pleasantly cartoony feel to Greedy Bankers, as the graphics are all 2-D and softly rendered, giving the game more of a comic book feel, rather than some super detailed platform title. The playing area is a graham cracker brown grid, with the gleaming square jewels falling into place and exploding into a pile of golden coins as you collect them. A meter of money sacks a la Scrooge McDuck in DuckTales keeps tabs on your progress, while blocky numbers in the bottom corners display remaining time and total score. After each successfully completed stage, some lunatic banker in a suit with money falling out of his clothes pops up to congratulate gamers before quickly tossing you back into the vault. 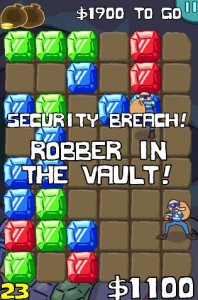 Now, if your ears aren’t perking up once the soundtrack kicks in, your funky bone is clearly broken, as Alistair Aitcheson assembled a set of grooving jazz tunes to keep the action moving. Amidst the clinking coins and exploding jewels, wah pedal guitar and soulful saxophone drive the party along, creating a super cool atmosphere to ease the sweat dripping suspense.

Puzzle games typically operate under notoriously simple controls, and Greedy Bankers is no exception to the general rule. Tap on a gem to collect it, or tap and drag to either move it out of the way or group like colors together to create larger stones for bonus points. Assemble a grouping of stones alongside a boulder to destroy it, and when the bank robber pokes his head in, just start tapping like crazy before the scoundrel makes off with your prized cash. The tapping and dragging has a tendency to become a bit hectic, especially during the later stages, but it remains right on point with the time attack craziness which drives Greedy Bankers. 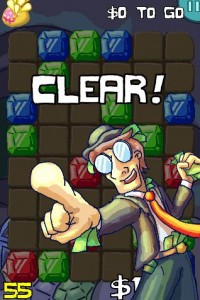 While this is clearly well put together, it definitely strikes me as more of a $0.99 title than $1.99 (which is with the 33% “launch sale” discount), especially since there’s only one mode of gameplay. Sure, the graphics and sound make this a fun diversion, but I’m not quite sure the hardcore Bejeweled addicts of the mobile world will be jumping ship towards another puzzle attack title such as Greedy Bankers.