Side scrolling adventure fans, start stretching out your thumbs, as Rock Pocket is here to deliver another installment of patience testing fun. Immersed deep into a misty, spooky world, it is your task to carry our slightly cute monstrous friend towards the finish line while avoiding enemies and seemingly endless amounts of pitfalls. While the graphics and sound flourish in a wonderfully Halloween-esque world, Monster Mania isn’t without a few ghoulish problems of its own. 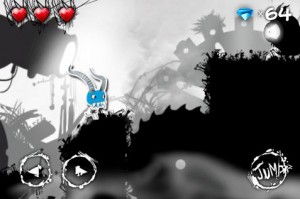 Set up as most adventure titles are, Monster Mania kicks our hero into action beginning with Scary World, featuring four stages of jumping, monster dodging, and racing challenges. Progress through each level successfully, and gamers can take on the challenge of mastering the next hair raising world as the difficulty continues to rise. Of course, this is all predicated upon your ability to actually finish the levels, which can easily become clouded with frustration as you stumble across the quirky and generally odd controls.

Nearly everything in the game is in various shades of black and grey, which is actually done wonderfully well thanks to silky smooth animation and plenty of backdrop accents. It almost looks like something out of a Tim Burton flick, with amorphous ghosts, graveyards, and lanterns shrouded in mist all dotting the various levels. Our hero is a diminutive sprite, with a massive blueberry colored head, cartoonish fangs, and a pair of antelope horns, although he’s a relatively fragile bugger when it comes to surviving Monster Mania. 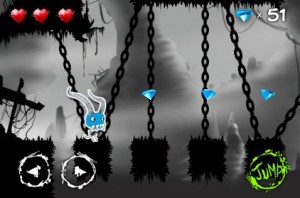 Eerie, cartoony music plays throughout the titles and option screens with plenty of synth driven violins, chimes, and bass lines. Reminding me of cartoons such as Aaahh Real Monsters, there’s a pleasantly spooky vibe created, which only increases during gameplay. After you inevitably flip the switch which causes a wall of deathly sharp instruments to come chasing behind, the pace quickens, reaching a pulsating rhythm as your eyes begin to widen with suspense.

Despite the excellent elements utilized in the music and graphics, Monster Mania’s controls were insanely frustrating to master, even though they only consist of moving forward as fast as possible and jumping. Certain obstacles require a double jump to clear, such as pitfalls, enemy monsters, or plateaus dotted with gleaming jewels or extra lives. Now, it doesn’t help that your character is falling into these endless holes to his doom faster than Augustus into the chocolate river during Charlie and the Chocolate Factory, but logic would usually dictate that pressing the jump button twice is an easy task. Unfortunately, the timing is incredibly odd, and a mistimed double jump results in death around nine out of ten times, making even the most relentless gamers grow weary after repeating the same level about twelve times just to reach a checkpoint. 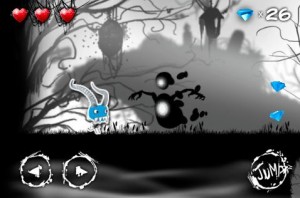 With a lush display of graphics, haunting music, and an attractive price of $0.99, Monster Mania is great; until you start actually playing it. Maybe side scrolling adventure masters who’ve beaten all of the Mario titles a dozen times will take this down easy, but for the average gamer, I’d advise taking out an insurance policy on your iPhone before doing battle with this one.