Game Savvy Studios is celebrating the launch of their new series of mobile titles with their first installment, FC Hockey. Representing an in depth, sports-centric focus on the traditional turn based games; this takes the excitement of hockey and adds a completely new, strategic spin on the action. While it might sound like a pretty steep challenge to capture the thrilling, icy, bone crunching nature of the sport in this format, Game Savvy Studios does their best to keep everyone’s interest before they toss this aside and flip on EA’s NHL ’11. 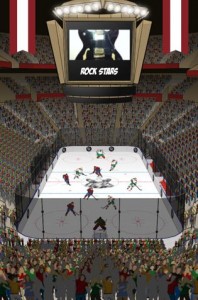 FC Hockey essentially operates under the same scheme as a turn based card game would, allowing each side an allotment of “players,” which you can utilize in different gameplay scenarios. Two numbers are assigned to the player, one signifying offensive skill, and the other for defensive. When two opponents collide; roll the die, add that to the number of the card, and the more powerful advances the puck. This basically goes back and forth in a tug-of-war until players run out of cards, signaling the end of the period.  The trick is conserving enough of the appropriate types of players so you still have a tough enough shooter or defender on your bench when the action finally reaches the goalie.

Since we’re working with cards here, the graphics engine is super trim and speedy, relying on comic book influenced illustrations for the players and arena. After each battle, a quick cut scene depicts your national superstar (hopefully) blasting a shot, delivering a devastating check, or slicing through the opposition towards the net. Commentary reminiscent of your local play-by-play broadcaster is emblazoned on the screen with blurbs such as “He rifles one!,” “What a save!,” and “He shoots, he scores!” All of the menu screens and displays are pretty iPod standard, and the only major difference in each arena is the country’s flag shining through the misty ice in the center. 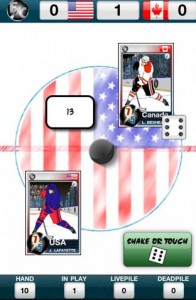 The ambient noise flowing through the background is a mixture of pass calling, sticks slapping, skates slicing across the ice, and players bouncing off the boards as if they were pucks themselves. The fans will occasionally shout in encouragement, and eventually erupt into fervor once you finally battle your way through the goalie. Other occasional sound effects such as the dice bouncing off the playing area and a puck launching off a stick will slink from the speakers, but that’s about it.

As this is a turn based strategy title, the controls are much simpler than the real deal, consisting of only a few basic options. Either shake the iPhone or tap a button to roll the dice, and scroll left or right to select another player to call into the fray. FC Hockey is more reliant on strategy and luck than it is anything else, so don’t break into a sweat over any intricate button mashing.

Although this seems relatively simple, the extended options and features truly add another dimension to what could’ve quickly become a monotonous and one dimensional title. Upon entering season mode, FC Hockey takes on a completely different persona, allowing gamers to customize their team’s jerseys, logos, line ups, and player names. Play general manager while setting up blockbuster trades with other squads around the world and take your team all the way to the top. Duke it out in realistic best of three, five, or seven game playoff series and monitor in-depth statistics throughout the grueling full season schedule. 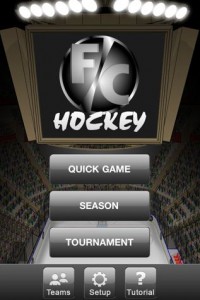 While the options, stat tracking, and ability to personalize your team are well thought out attributes, this all really depends on whether or not you’re interested in playing anywhere from 29 (short season) to 87 (full season) games of card based hockey. There’s a quick play and tournament mode as well, but some gamers might find themselves craving the real thing before FC Hockey has a chance to truly catch on.