With Final Fantasy III, Square Enix has done it.  They have finally released both a fairly modern RPG for the iPhone and also destroyed the $10 line to become the most expensive mainstream game ever sold on the App Store.  At $15.99, Square Enix is telling us that Final Fantasy III is a premium product.  This review attempts to summarize the value of the game compared to the rest of the App Store marketplace; not to compare the price to DS games. 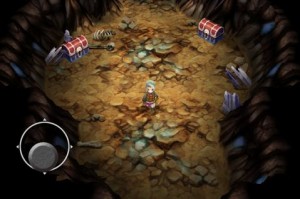 Obviously price is an obvious point of concern.  Is this game so much better/more fun than other games before it that released at much lower prices?  Honestly, no.  However, it is by far the best version of the Final Fantasy series ever released for the App Store and for some people that makes it worth the cash.  The graphics, sound and controls are really all top notch for a game released for the Nintendo DS nearly 4 years ago.  However, compared to some of the other games you’ll find on the App Store that cost less, they really aren’t that special.

The characters and backgrounds are a fairly decent looking although you will notice some pixilation.  The music comes straight off of the DS release so it is of high quality.  Historically, few games have had better music than the Final Fantasy series and it remains one of this iterations strong points.  The story itself is fairly blah.  It does have a good amount of length about it though and doesn’t require you go out and constantly kill 10 of something like you find in the Zenonia series.  In my book, that is a major plus. 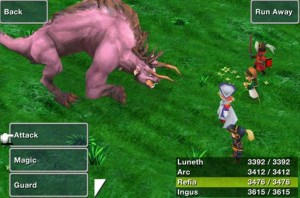 The 4 playable characters in the game have very little personality or characteristics that make them different from each other.  In fact, you have the ability to switch between each of the classes at any time.  That is a pretty unique trait to this RPG.  However, while it was a design decision to allow for near instant class switches, it also makes long term strategy for class upgrades fairly moot in favor of short term strategic decisions to switch classes up.  As a fan of RPG’s, I’m not sure I like the instant gratification of a class switch.

The game isn’t without its issues.  The save system in particular can be a bit frustrating.   Don’t rely on the quick save (the save that occurs when leaving the game) to keep your progress because when you die (and you likely will), you will lose all of your progress as there is no autosave.

All of that being said, the game is a tremendous amount of fun.  The storyline is easy to follow  (just not terribly interesting), the inventory system makes sense (thank the Final Fantasy gods!) and overall, the game plays smooth and just works.  If you played the original for the NES many moons ago but not the updated DS version from 2006, you’ll notice a lot of additions.  Besides the touch controls, which are done as well as any game on the App Store, (seriously, these controls are gold), you’ll also find a lot to like about the 3D characters which are able to even show what weapons/shields/etc they are wielding. 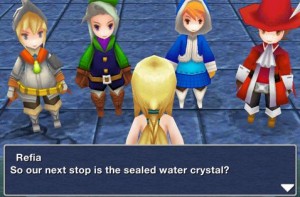 In many ways, Final Fantasy III simply is a head above Zenonia 2 and its like on the App Store simply due to the tremendous production quality that Square Enix delivers.  The English translation of the original story is absolutely pitch perfect unlike what you typically see from Korean/Japanese released games.   Of course, for $16, one questions if it really is worth all of the extra cash.  The full motion videos that shipped with the DS are nowhere to be found which seems odd considering the iPhone is at least as powerful as the aging DS device.  In summary, this is a game that any RPG enthusiast will really like.  However, for the price, you might want to consider waiting until a sale before taking the plunge.