Travel back in time to ancient Asia with SteamPack’s latest title, SamuraiTale, which tosses gamers into a story of vengeance and violence in traditional beat-em-up gameplay fashion. After the sword master, Detuka is murdered by assassins from Dark Crows, the young disciple Ryugetu sets out on a mission of redemption which is steeped in blood. Armed with just a samurai sword and his thirst for revenge, Ryugetu battles his way through the swarms of enemies in true hack and slash style. 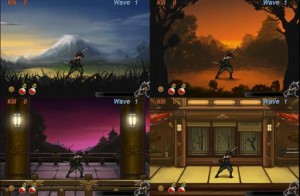 SamuraiTale features our hero Ryugetu with his feet planted as if they were in cement, completely stationary like a statue in the center of the screen. Various enemies rush from either side, running at different speeds with unique attacks, requiring players to slash with precise timing in order to survive. A mistimed attack creates a delay where you’re left completely vulnerable, and with a strict “one and done” life meter, a single mistake pretty much means game over. Each of the four stages harbors a different boss character, with increasing difficulty and insane amounts of foes rushing towards you towards the latter moments of the game.

The animation is smooth and quick, with small spurts of blood leaping out from enemy assassin’s chests following a successful kill, as Ryugetu stands tall and poised in the face of death. In between levels, gamers are presented with some visual eye candy in the form of brilliantly drawn storyboards, accompanied with a few choppy blurbs of info about the story. As with many painfully obvious translated games, SamuraiTale has a couple English SNAFUs, including “Ryugetu finally gets the entrance of the castle,” or “Ryugetu finds that Dark Crows is not the only hit sqad (sic).” Seasoned gamers will know developers have been screwing this up since the 80s, but it’s still a clear lack of attention to detail, although not quite as side splittingly goofy as something along the lines of “All your base are belong to us.” 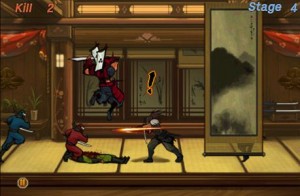 With a brimming soundtrack, SamuraiTale keeps the action pumping for as long as you can survive (which usually isn’t too long, unfortunately), and dots the background music with plenty of extra sound effects. The sound of enemy footsteps creeps up to Ryugetu, as a gritty slashing sound erupts with each kill, or a harsh metallic ping following a mistimed strike. Instead of recycling the same one or two tracks, SteamPack assembled a fairly full soundtrack, giving each stage and the menu screens their own dramatic, epic song.

Since Ryugetu doesn’t need to take a step in either direction, gamers will find themselves tapping up a storm in order to survive past the initial wave of Dark Crow assassins. Tap the lower portion of the screen on either side to attack low, and press the top part of the screen to strike high. Coordinating this is crucial, as certain enemies leap into the air while others charge on the ground, sometimes arriving within a split second of each other. 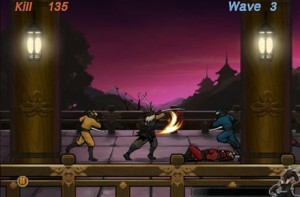 Grammar errors and jokes aside, SteamPack utilized the soundtrack and graphics to their advantage in an attempt to make a fairly one dimensional game more attractive than it actually is. In addition to the four stage story mode, there’s also an unlimited option which pits Ryugetu against a never ending onslaught of enemies, although the replay value here is pretty limited. However, for $0.99, I’m not exactly expecting SoulCalibur 5.