The Fish Dies in the End

Grab the sunscreen, pull on your swimming gear, and strap on your best pair of flippers, because Gutenberg Neto is taking iPhone gamers on an all new underwater adventure. Join our aquatic friend as he swims through the sea, avoiding enemies and obstacles to survive as long as possible in this fast paced side scrolling title. Pleasantly cartoony, easy on the eyes, and simple to play, The Fish Dies in the End cuts the fat and serves up a game which is almost exactly what its name implies. 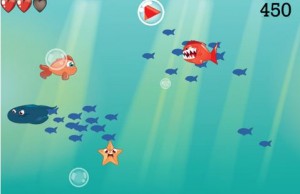 I’d be lying if I said the little guy didn’t remind me of the iconic fish from Disney’s Finding Nemo, although he’s without the exotic clown fish markings and signature Pixar animation. With a goofy grin and a pair of brilliant sea green eyes, he attempts to navigate through treacherous waters with spiky coral, electrifying jelly fish, and razor sharp sea urchins. As gamers progress, frowny faced sea rays and bloodthirsty piranhas come flying across the screen, topped off with the feeding frenzy of sharks that’re really capable of ruining your day. The longer he survives, the higher the score climbs, but with only three lives, it takes a soft touch and nimble timing to make it past more than one or two shark attacks.

The Fish Dies in the End is completely 2D, with a softly colored aquatic background and floating bubbles running across the foreground of the action. Each of the enemies is surprisingly angry at the little goldfish, as advertised by their glowing red eyes, gnashing teeth, and disdainful scowls pasted upon their faces. When colliding with one of these testy foes, our underdog hero winces in pain, blinking with invincibility for about a second before returning to the fray. The action really heats up during the shark attacks, as the screen fades to an ominous dark reddish hue as a wave of the ferocious hunters come screaming at you from nearly every direction. 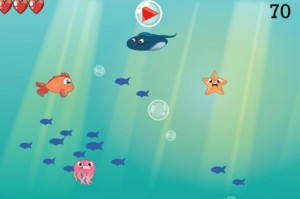 A cutesy, bubbly background song provides the music for menus and gameplay, accentuated by a handful of effects. Tapping to swim evokes a quick splashing sound, while taking damage from one of the hostile starfish or sea urchins is marked by a little smacking effect. As the background colors change for an upcoming shark attack, the music shifts into overdrive for a few moments, quickly changing back to the original song (provided you survive the wave of predators).

If you’re pining for a simplistic control system, look no further, as The Fish Dies in the End is all centered on one tap, and one tap only. Press to swim upward, release to float back down. The real challenge though is learning how often and long to tap to effectively dart between attackers, especially the sharks, who move faster than anything else on screen. 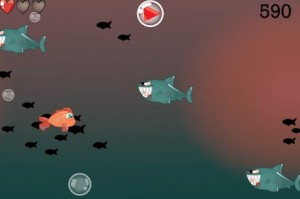 This isn’t super flashy, complicated, or thrilling, but simply an entertaining, quick mobile game which achieves exactly what it sets out to do. Swim through the obstacles, rack up points, and fight your way through shark feeding frenzies, but rest assured that this fish will die in the end, no matter what.