Publisher: Out Of The Park Development

Fans of baseball, rejoice!  A baseball game has finally arrived for the iPhone that doesn’t take just quick flicks of a finger to be successful but instead rewards thinking on your feet and making good decisions in the role of a GM or Manager of a major league club.  iOOTP is built on the same simulation engine of the world’s best selling baseball simulation, Out Of The Park baseball (OOTP). 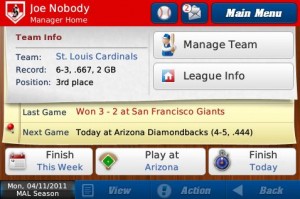 What is involved in being successful in iOOTP?  Well success comes in different forms depending on what you are looking for.  You can manage each and every game if you’d like to, following along with the play by play and strategically stealing a base or bringing in the closer.  Or perhaps you would rather sim a week at a time and make moves from behind the scenes, trading for the players that will help you get to the pennant.  Whichever way you decide to control the game, you will be able to play using this year’s rosters, start a fictional league and work from an initial draft or even start in one of three historical seasons (that use real stats, teams and players from the past).

The interface within the game offers an absolute ton of information about your players and the controls make it easy to get from one screen to the next.  You can pull up a player by simply clicking his name from the roster, depth chart or rotation and slide your way to the exact information you are looking for.  If you have ever played Football Manager for the iPhone, this will feel very familiar.  The screens are simply laid out in the most simplistic, yet informative way possible. 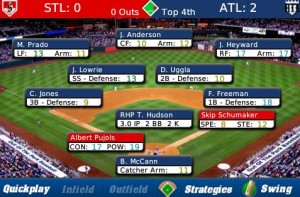 Each day news reports are created from around your league to show you what’s going on.  Whether it be a weekly award or a major injury, seeing what is going on in the league during a given day is pretty easy.  One of the things missing from the initial release is an ongoing history for each player in your league.  The developers of the game have already mentioned that the information is being tracked and may be released in a future update.  This would be greatly appreciated as it would add further to the feeling of immersion within the league.

As far as the sim results for the 2011 season, be ready to get excited.  The standings looked spot on for 2011 after replaying it multiple times.  Unfortunately my Cubbies finished middle of the pack during the first season.  During the offseason I was able to make some key acquisitions, including picking up Mr. Albert Pujols, which turned the subsequent year around and helped my Cubbies easily make it to the playoffs.  There is no limit on the number of seasons you can play so that means seeing exactly how a player like Bryce Harper develops, year after year and his final career stats. 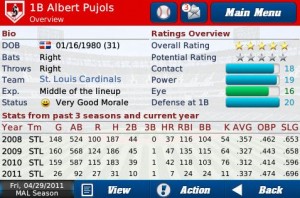 There is really no other iPhone baseball game that is like iOOTP.  With its realistic stats, great interface and unbelievable detail – it is sure to please anyone interested in the numbers of baseball or the strategy of managing a team.  There isn’t a single fantasy league baseball player that shouldn’t take the leap and buy this game.  After all, it is tailored to your exact interests.  Pony up the $4.99 and jump into the 2011 season today.