Notifications are first up on the list of things spruced up. You will now enter a notification center from anywhere on the iDevice by simply swiping down from the top (sounds a lot like a few Cydia apps I know).

Lockscreen has a ton more information. Sounds like they took a cue from LockInfo and Intelliscreen. Not much use for them going forward I think. 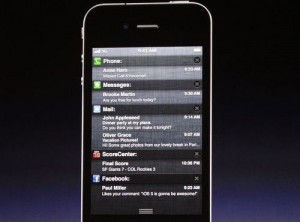 Now talking about the second feature; News Stand.  Something to do with subscription based services.  Not something I am interested in so I won’t comment much on that.

Feature 3 is all about better Twitter integration.  That should make a ton of people happy.  No wonder Twitter was telling developers to stop developing Twitter apps.  Apple is getting into the business…  Twitter integrated into things like Camera and other Apple made apps.

Feature number 4 is Safari upgrades.  Already mentioned that Twitter works within Safari now.  I’m glad something is being done with this because I spend a lot of time in this lite browser.

It now parses multiple pages into one entire story.  i like that.  I hate trying to click on those tiny numbers for the next page.

Tabbed browsing is here (thanks to Opera, right?) and you can now email links to stories easily.  That feature that parses pages…badass.  It really will save a bunch of time when going through pages.

Reminders are feature 5.  Allows you to make a list with multiple dates you will be reminded of…like a calendar?

Location based reminders do sound cool.  They gave example that when you leave a convention center, remind yourself to call your wife.  It will remind you immediately upon leaving checked in area.

Feature 6 is upgraded camera app.  Can access it easily from lockscreen by double tapping the home button and clicking it.  Launches much faster (that is nice).

Sounds like mail delivery still won’t give you different sounds when mail is from a certain account.  Argh!

PC FREE!!  Wi-fi syncing!  Now that is a worthwhile feature!  of course, if you were jailbroken it has been around for a while but it is nice that Apple is finally doing it.

Setup and activation can be done right out of the box.  No need to ever plug your phone or iPad into a PC if you don’t want to.

Game Center is feature number 9…?  I thought this has been out for a while (of course I know it has been).  Meh…  A bunch of fluff like avatars, downloads, etc.

Nope.  I was wrong.  This is a messaging service between all iOS 5 devices…Sounds a lot like PingChat.  You can even see when someone is typing ala AIM.  Pretty sweet.  I wonder what AT&T and Verizon think about it not being text message based…  I know what I think.  I’m cancelling my text messaging service!

Worst news of the conference.  iOS 5 not shipping until Fall (when the new phone presumably comes out).  Good news is that it will work for iPhone 3GS, iPhone 4, iPad and iPad 2, 3rd and 4th generation iPod touch.

Steve comes out finally to talk about iCloud.  I’ll just summarize when he is done.  There is going to be a lot of competition out there for this service as already Google, Amazon, and Sony have their own version.

Everything on the iDevice will be able to use iCloud including apps, music, pictures, etc.  He says it just works…  Steve makes fun of MobileMe by asking the crowd, Why should we believe Apple?  They are the guys who brought us MobileMe.

Mail and contacts via the cloud are free now.  MobileMe no longer exists.  iBooks and App Store sync across all iDevices and you can even do backups of your entire device to the cloud.  On a new phone, just type in your Apple userid and password and all of your content from the old phone is loaded automatically.  Pretty sweet.

Going forward, any music you bought in iTunes while using the cloud will be available to download forever.  Even if you have a crash, you will have all of that music saved for you in the cloud.  Works across all of your devices.

The entire iCloud service is FREE but you can bet it won’t work with a jailbroken device.  5 GB of space available for documents, photos, videos, etc.  Purchased apps and music don’t count towards that limit.

How about music you ripped (or stolen).  Apple will match those songs against their list of music (just like Sony, Google and Amazon will with their services) and give you the ability to play them.  However, this costs $25/year.