To say that TITUS is unusual may do it a disservice.  Sometimes the very adjective, unusual, leads to negativity.  No such thoughts should occur when loading up TITUS.  Instead it is a uniquely refreshing game in a genre that is all too often, underrepresented in the App Store.  For that alone, I say well done Christophe Canon, who developed the game. 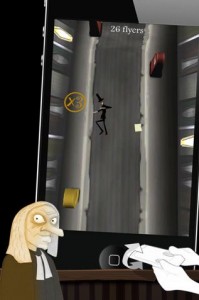 The game revolves around the title character, TITUS.  Set in a fictional, seemingly Eastern European country, your task is compete with a number of politicians, getting elected by overcoming obstacles (whether that means playing fair or fighting dirty).  Each opponent has a connection to you in some way and a small cut scene introduces your next political foe.  Overall, the presentation is top notch and has a great artistry to it.

In politics, playing fair or dirty is the name of the game but even the nicest player is still trying to win the election.  That means sending out campaign ads, doing political speeches and the like.  The back handed politicians in the making can start rumors and buy their way into the local media.  All in all, it is likely a more realistic depiction of politics than most people would like. 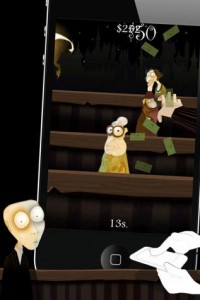 Each of the actions you can take requires you performing a mini game.  Sending out campaigns ads for example, require that you perform a Doodle Jump type mini game that allows you to deliver your message to your constituent’s doorsteps.  Another mini game revolves around you trying to complete your campaign speech while those in the crowd hurl rotten tomatoes at your face.  It is a cute take on the world of politics and the diversity of the mini games is generally good.

All of the actions above require money and to earn money you need to do fundraising.  Each fundraising event also requires to play a mini game.  This fundraising mini game does have the tendency to get old rather quickly as you will need to do a lot of it to be successful.  I would love to see additional fundraising methods added in a future update. 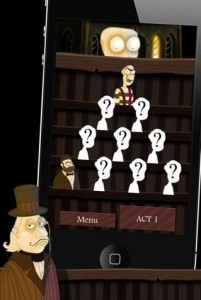 All in all, I have never played a game like this on the App Store. TITUS is an easy game to pick up and play.  The game gives you about 10 opponents in total but once you make your way through, there is very little reason to play again.  Of course, for only two bucks, those 10 opponents will certainly test your political vigor and towards the end, become increasingly difficult.  One thing is not difficult, recommending this game to anyone.  TITUS is mobile gaming at its best.