I’m embarrassed to say that there is a game on my iPhone that has sat there for months.  Literally.  I received it to review and it got accidentally thrown into a folder never to be seen again.  Until now.  Not only is that game worth playing but quite frankly, it’s fantastic.  I present to you, Quell.  An unbelievably relaxing puzzle game that is soothing, yet increasingly difficult.  Like any good puzzle game the gameplay mechanics are easy to learn but hard to master.  If I would have played this game right away, it would have easily been my favorite puzzle game of 2010. 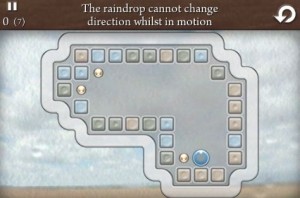 The presentation including the sound, art and especially the music are top notch.  Diving further into the music specifically, it is seriously fantastic.  Like some of the best mood altering music I have ever heard in a game.  It immediately sets the tone of the game to a slow, rainy day where you are staying indoors and relaxing by a fire.  It is seriously impressive.

The actual mechanics of the puzzles are fantastic as well.  Your job is to slide a rain drop through obstacles throughout a given level.  The main crux of the issue is that you have to collect several pearls on each level and the game counts how many moves it takes to reach them.  Your job is to do it in as few moves as possible.  The game saves a record of how many moves each level takes and offers quite a few awards or achievements for meeting movement goals.  There are also a ton of levels in the game and you should easily get a few hours of enjoyment out of Quell. 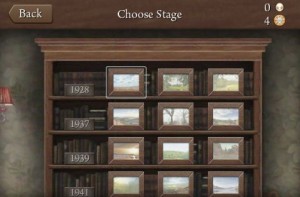 There are a few objects that can slow you down from meeting your goal.  As the levels become more difficult, bushes will crop up in your path after crossing a path just once sometimes causing you to have to restart the game because choosing the wrong path made the puzzle impossible to beat.  Don’t worry though, if that happens, a friendly message pops up and lets you know.  If you are ever truly stuck, the awards you earned in previous stages can be used to unlock the entire level and move on.  I recommend not doing that.  ‘Cheating’ in Quell would only be cheating yourself. 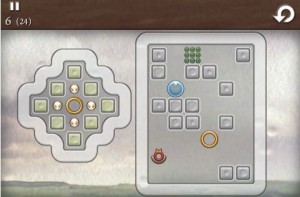 In summary, this game is relaxing, yet difficult enough, to cause you to think through each move.  The entire presentation is top notch.  I only wish I had seen this title earlier so I could tell you all about it.  Now that I have, get in a comfortable chair, load up the App Store and download Quell for $2.99.  You’ll be glad you did.