My first impressions of Ticket to Ride were not good. The menu graphics seemed hokey; they are all still-frames that look like oil paintings. Once you tap on a link to another menu the next menu slides in to frame. This whole time the train conductor is voicing over each screen with the options that you have just activated. Once you’ve tapped the Play! Button you are shown four different game maps to choose from. The United States map comes with the game but the other three maps are DLC, the most expensive being $3.99; the least expensive – 99 cents. This menu is also the menu where you choose to play against the computer, online, or pass and play, all modes allow up to five players. 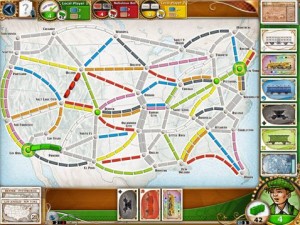 Once the game begins the hokey graphics become a thing of the past and brighter and better graphics take over. If you need it, there is a very in-depth tutorial that will literally walk you through every aspect of the game. However, if you are anything like me, a real man, you will forego the instructions and learn as you go. Which is what I did when I got whipped my first game and the second. But I finally won the third game (after I watched the tutorial). So save yourself some time and watch it.

The gameplay is pretty simple, the object of the game is to create as many train paths as possible. The game begins by having you pick to destination tickets.  By connecting to these destinations, you gain additional bonus points.  Certain tracks require specific train colors; green tracks have to have green train cars, red tracks need red cars. Gray tracks however, can use any color train car. Each round you are allowed to pick up to three destination tickets, pick two train car cards, or play the cards you have collected. 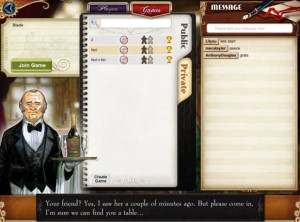 The solo games are quite fun and they move along very quickly.  I found that the computer players aren’t too easy or too difficult. Online play is a different story. I tended to wait for the other player to make their move and I didn’t seem to lose quite as much. Oddly enough, I never played against another American when I played the USA map. 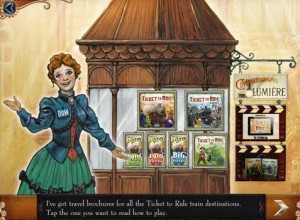 After a few games you will be hooked, I’ve been playing Ticket to Ride ever since I downloaded it. It’s taken me over an hour to write this review because I keep getting sucked into another game. To wrap this up, Ticket to Ride is an amazingly fun game and well worth the $6.99 price tag.