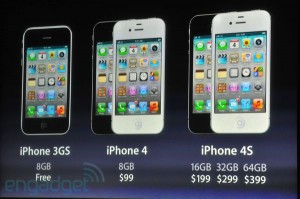 Pre-orders for the 4S start this friday, the 7th. Available on October 14th.

2:34 PM ET    Rumors already abound elsewhere that to get Siri to work you have to sound like a child speaks…of course, for a lot of users that should be par for the course (not any of our readers of course).  That doesn’t sound nearly as cool as the, “speak to it however you normally do” rhetoric we just heard.

2:28 PM ET Siri will also do dictation on emails and notes you write which is really nice.  However, you pretty much need a wireless or 3G connection to get the proper word matches.  It works out of the box but learns your voice and does better as you use it more often.

2:25 PM ET In a lot of ways, Siri is like a talking WoframAlpha (if you know the reference).  You ask it a question and it will try to think of ways to identify the answer.  Not just by equation bu by searching the internet and reference material.

2:23 PM ET Siri will utilize other components of the iOS 5 like reminders.  “Siri, make me a reminder to call my wife when I get off of work.”  When you walk out of work, it tells you to call your wife.  It knows where work is.  It knows who your wife is and what number to dial.  Pretty neat if not a lot Big Brotherish.

2:21 PM ET Siri will be able to schedule appointments on your calendar.  It will be able set your alarm.  It will verify everything you ask it today regardless of the specific way in which you say it.

2:18 PM ET Another example: “Find me a great Greek restaurant in Palo Alto.” Siri says (courtesy of Yelp) that she found 14 — sorted by rating.  Cool.

You will be able to ask real world questions and Siri will answer with real world answers regardless of how you ask the same question. 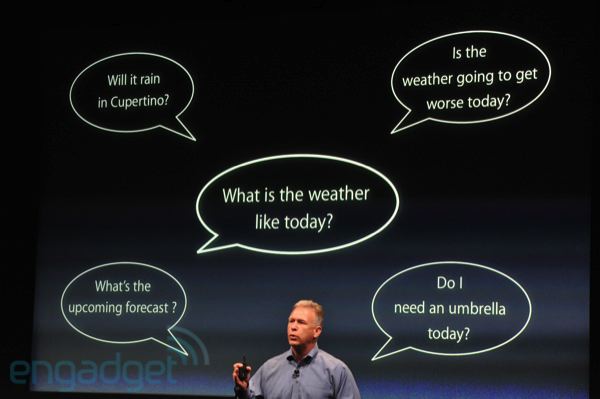 Last up is the voice activated personal assistant everyone has talked about for a year – Siri (at least that was what it was called before Apple bought it).

All new 8 Megapixel camera with 73% more light for night pics and 25% faster flash.  They also have more clarity, improved picture quality and it will take a picture in 1.1 seconds on first shot and .5 seconds on second shot.  That does sound nice.

Some new antenna on the phone allows for much better phone quality and supposedly, download speeds twice as fast.  My first thought – yeh…right. I don’t believe it especially since a lot of folks had problems getting even close to the download speeds they were supposed to get before.

Regarding battery life, the 4S will offer eight hours of 3G talk time. Six hours of browsing, nine on WiFi. 10 hours of video, and 40 hours of music.  Seems very similar to the iPhone 4.

Unsurprisingly the game looks great but lacks any real skill to win and is just another hack and slash.  It’s Fruit Ninja in prettier clothing 🙂

Epic showing off new game – Infinity Blade 2 on iPhone 4S.  Surprisingly they said they made 20 million on iOS Infinity Blade.  Not bad at all for a game that looked good but didn’t allow much free movement (none).

New iPhone 4S.  No suprise with the name.  looks exactly the same.  This can’t be the “new” phone, right?  New processor inside which is faster…  2 times as fast the processor in iPhone 4.  Graphics are 7 times faster.  of course it is the same size and lacks buttons for games…

Time to talk about iPod’s.  I’m going to go to sleep for a bit.  Not interested at all…

Still old stuff.  Where is the new stuff?  Did WWDC never even happen?

Example.  People are driving to your house.  they get lost 9even though they have a GPS) and you can easily see where they are.  However, if you think about it – how many people would get lost, not know how to use a GOPS and know how to turn on the tracking part of their iPhone?

Something new.  A new feature lets you “find your friends” which is neat.  Not really sure how it works.  Does the person have to allow you to find them?

More rehashing of old news.  I wonder why they told us about this thing in the first place.  Onwards please!

The site keeps going down.  Sorry about that.  They are getting near the end of rehashing iOS 5 so you didn’t miss much.

iOS 5 – top 10.  Hey we did this months ago!  Personally I used it and it was buggy as heck.  I’m sure it will be a bit less buggy at release.  Speaking of release…

$2.99 for a card…hmm.  $4.99 for international.  That doesn’t seem like a much better deal than what I can do by actually signing a card and sending it.

Gearing up for the holidays I guess as Apple just announced a greeting card app.  They print real life cards and send them to people.  You get a push notification when it is sent.  Kind of neat.  USPS has to be pleased something is going through the mail…

Apple has paid out 3 billion dollars to developers.  If they take a 30% cut of the dev’s profits that means that Apple has a good billion or so themselves.  The developers should create a big cheesy check and give it to Apple.  OK, I’m being facetious.

They have now passed 250 million iOS devices.  Anyone care to find out how many Android devices are on the market?  Nevertheless, absolutely amazing for one company to sell so many devices.  Next up, iOS 5 talk I guess.

75% of all tablets sold are iPads.  This will likely dip in the coming year as there are newer players coming to the market soon.  big ones like Amazon.  We shall see.

Back up.  iPhones are 5% of the world’s phone.  In a survey it was found that 70% of people were very satisfied by their iPhone’s.  Runner up, HTC with 49% very satisfied.

Well people are certainly interested.  Ars Technica site is down along with Engadget and Gizmodo.  Craziness.

iPhone 4S cover is blown by Japan Apple website (one product I predicted down, one to go).  Already listed date of October 14th.  Tim Cook said he is talking about iPhones “next”.

Holy crap.  I was wrong.  Apple sold sold 45 million iPod’s during a one year period from July 10 to June 11.  45 million!  It must be a bunch of old people buying them or something???

He is now talking products and hardware along with their software sales.  Seriously, who buys an iPod anymore?  It almost seems like one will be announced here as well but who knows.

On Apple website – Sprint logo showing.  Something to those rumors afterall…

Tim is talking retail stores …yada yada yada.  this stuff is more for the Apple faithful and stock holders than me.  357 stores in 11 countries.  Lots more coming.

Just starting.  New Apple CEO, Tim Cook with his first announcement.  Tal;king Apple history.  Looks kind of like Jobs up there without the turtleneck.