Before I put the game down too much, I want you to know Asphalt 5 can be a fun game.  However, often it is too challenging for the wrong reasons.  The most challenging aspect of the game is it’s ai is made of the stuff of infamous sports games past.  You know what I’m talking about.  It’s the ai that refuses to lose no matter what.  You can crash it into the wall, watch it fall back halfway around the track and stunningly it will begin catching up with you (all too quickly).  This isn’t the type of ai that is fun to play against, it’s the type that makes you want to stop playing the game and throw your iPhone against the wall. 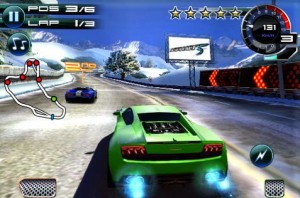 It’s not all bad.  The game has quite a bit of functionality and prettiness for an iPhone game.  It certainly is nice to looks at.  I feel no qualms in comparing Asphalt 5’s graphics to a PS2 game.  It’s nice to see snowflakes fall in Aspen and the solar flares in Hawaii.  Little touches like this make the environments you race in a pleasure.  There are also quite a few pretty cars to drive and they are based on real life cars.  It’s not such a novelty to have real life exotic cars to use on the console but on your iPhone, it’s pleasure to drive a Ferrari or Lamborghini.  The game even gives you a bike or two you can race.

The sound is also nice.  The game gives you different engine sounds for each type of car you can drive.  They sound right and the games ability to integrate your iPhone music directly into the game is welcome.  Between the graphics and the sound, the overall presentation is handled very well. 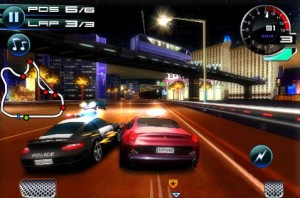 Multiplayer is full featured and actually works.  I have been able to play on demand wireless racing with people all around the world every time I have tried.  The only issue I have found with the multiplayer capabilities is the lack of other games in the waiting room.  It common to see just one game being set up in the lobby.  If you didn’t like the map the host is using, you can create your own game and wait…and wait.  Nevertheless, I have rarely seen the kind of functionality Asphalt 5 offers in another iPhone sports game.  The real time multiplayer racing was a nice treat that was fairly unexpected (especially since it works).  In my hour or so of multiplayer time I had only 1 game get disconnected.

The game modes in the single player include a straight race, a time challenge and elimination mode.  The elimination mode kills career mode in Asphalt 5.  It is impossible to destroy or eliminate all of the cars before the race is over.  Maybe, just maybe you will be lucky enough to do it once or twice but try doing it for every map and you are going to get frustrated.  Unfortunately, elimination modes difficulty makes beating career mode all but impossible.  Possibly this will be fixed in a future update but in the meantime, no matter how much you upgraded you car, you are likely to be stuck trying to win the elimination modes for each track many times. 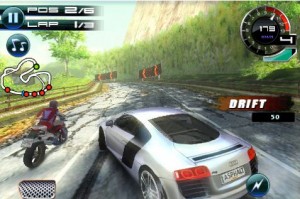 Asphalt 5 is a watered down version of Burnout.  Burnout and Asphalt 5 have so much in common, including getting speed boost and points for “close calls” on the track, that it’s uncanny.  It’s arcade racing in its most basic form.  If that doesn’t sound like your idea of fun, don’t expect to like Asphalt 5’s single player mode.  However, if you are looking for great real time, arcade, multiplayer racing game then Asphalt 5 will fit like a glove.