Call of Duty: World at War: Zombies is a FPS built in the vein of the other Call of Duty games.  The script; Nazis have turned into Zombies and apparently want to eat your brains.  You need to kill them to survive.  First person shooters have been tried on the iPhone with a varying degrees of success.  COD: Zombies has its ups and downs.  The ups would easily outweigh the downs if it only the game included more value for the money. 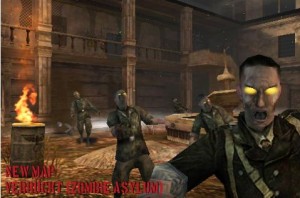 The game includes both single player and multiplayer components.  The single player mode is built on the idea of killing zombies, lots of them.  In fact, the mode revolves around the idea of continuous swarms of zombies trying to break down barricades and killing as many zombies that make it through.  You run around the house, spending the points you earn for killing zombies on new guns and to open up new portions of the house.  If you think it sounds really basic, you would be right but it is also a great deal of fun.  The problems lie in the fact that there is simply one level in the game and just the one single player mode (survival mode).  Inevitably you will die; it’s just a matter of trying to make it as long as you can before a zombie kills you in cliché zombie fashion (again with the brain eating).

Activision promises new maps and levels but unfortunately they will charge for the additional maps they release.  In other words, you are spending 10 bucks for 1 mode and one map.  A steep price to play in my option.  That being said, the controls are great and offer 3 different control schemes for killing zombies.  In an iPhone FPS, nothing is more important than fluid controls and one of the three control options is likely to be a good fit for you. 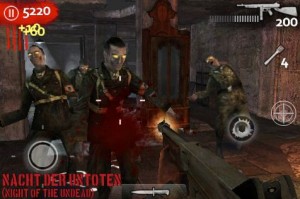 Multiplayer is hit and miss.  The online component usually has games available where you and 3 additional players try to fight off the advancing zombie horde but unfortunately disconnects are common.  The game also offers Bluetooth and local Wi-Fi options.  The only multiplayer mode offered is co-op which is fun and welcome in most FPS, but no deathmatch mode means replay value is less than it could be. 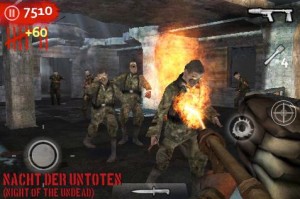 If my reviews only dealt with the graphics, controls and the sound of an iPhone game, Call of Duty: World at War Zombies would be rated much higher.  As it is, the value just isn’t there and the money you spend on this game could be better spent on several other, lower cost games.  That all being said, if you have the money and are looking for an hour or two diversion (and not much more), Zombies is a top notch fit.