Doom: Resurrection is a tough game to judge.  It has quite a few good qualities but one major downside, especially when comparing it to other first person shooters on the iPhone. That downside, depending on who you are and how you enjoy playing games, could be considered a big one.

The specific downfall is one that plagued early iPhone games.  You control the crosshair and the aiming of your gun but you have no control over your movement.  If you have ever played House of the Dead or any other “rail shooter” you know what I mean.  Your character moves around a lot but you are not the one doing the moving.  If you can get past that hurdle, Doom can be a pretty good experience.

First off, the graphics are great.  Pretty clean cut and if you ever played any of the original Doom’s, you will ap0preciate that all of the textures and graphics have been vastly improved.  The sounds are creepy and can give you a decent idea of what type of monster you’re facing before they even show up on the screen. 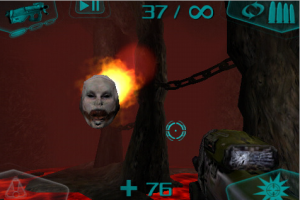 The monsters also do vary quite a bit.  There are at least 8 or 9 different monsters in the game and if you count some variations, even more.  Each of them moves differently, sounds different and takes a different amount of damage.  The variation is nice and makes the game more interesting as you move along.  The game play is also varied by the boss battles that ensue through several portions of the game.  The boss battles really are generally much tougher and a couple of them may take you a few tries.  Thankfully the checkpoint system doesn’t make you start too far back.

The controls for the game are very good.  The one I ended up using was motion based.  Depending on which way you turned the iPhone, the crosshairs move with you.  Calibration resets at the beginning of each level and can be reset at anytime through the option menu.  It’s easily the best control system on a FPS that I have seen but since it’s a rail shooter, it can’t be compared apples to apples. 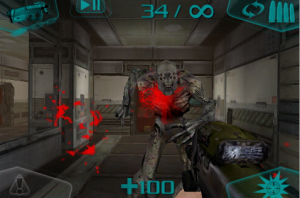 Though the game only has a single player mode, it is quite long.  I was able to play it for just about 3 hours so before finishing it.  There isn’t really much replay value for the actual campaign, especially since this game plays on rails (literally).  There are a few things you can do after beating the game.  There are several interesting challenges built into the game along with some maps you can play separately from the campaign.  The amount of content packed into Doom: Resurrection puts other games like Call of Duty: World at War: Zombies to shame.  If you get past the shooter on rails limitation, you will find yourself having a very good time indeed.