You’ve probably heard of games like these.  They may have been referred to as casual gaming.  But there isn’t anything casual about trying the same level over and over again, sometimes 10 or more times trying to finish it off.  It’s challenging, frustrating and surprisingly addictive.  Overwhelmingly though there is a feeling that what you are doing is a whole lot of fun. 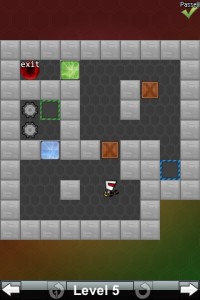 The graphics are simple and the music is too but neither hurts the overall game play.  The game isn’t one that you are likely to play and beat in one sitting.  Instead you’ll play and move through levels until you get stuck and inevitably frustrated.  The next day, maybe while you’re on the toilet (admit it, you play games on the toilet all of the time) an idea comes to you and your able to move on.

The only frustrating thing can be when you get stuck on a level and no matter what you do, a solution doesn’t come to you.  In those cases, you cannot continue to the next level.  It would be nice to be able to move on in that instance and come back later once you play through other levels.   Even though I’m sure you would feel like you are only cheating yourself…right? Anyway, in an instance like that just ask your wife or girlfriend.  I’m sure she’ll be happy to show you how easy it is to beat. 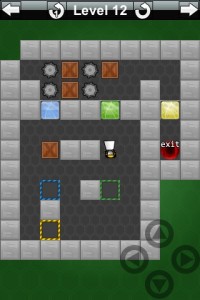 Lack of cheating aside, Boxed In 2 will give you hours of enjoyment, 50 levels in all, for just a buck.  By far one of the most entertaining and worthwhile games of the year.  Amazingly enough, this game was developed almost entirely by a 2 man shop.  Way to show the big boys how to do things (I’m looking at you Gameloft and EA Mobile). Rumor has it this two man crew has another game coming out soon.  Trust me when I say I will be waiting in line to play.