I guess I should start this review with a disclaimer.  I don’t like HALO.  I think it’s bad.  I think the single player mode has an embarrassingly poor story line (in all of the HALO games) and the multiplayer mode isn’t much better than some of the first multiplayer games ever developed for PC gamers.  I know people like it.  I am not one of those people.

The reason I mention all of this before reviewing N.O.V.A is that for all intents and purposes, N.O.V.A is another 4 letter name for HALO (complete with a stupid acronym).  That doesn’t mean it’s all bad.  In fact, parts of the game are surprisingly fun. 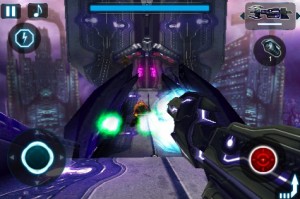 N.O.V.A starts off its single player mode with some decent looking cut scenes and with some half thought out story about aliens in the future.  I have no problem with this.  Just a typical sci-fi plot.  The first thing you’ll notice as you go through the opening tutorial level is that it’s pretty.  In fact, the graphics are among the best of any game I have seen on the iPhone.  The colors are bright and clean.  In fact, the levels you play through in the game (12 or so) all look good on the iPhone’s screen.  Each is distinctive as you go from a jungle map to a space ship to an alien planet.

The sound is standard fare for a science fiction FPS.  The background music is nice but some of the alien noises are a little over the top.  My wife overheard me playing and thoughts I was killing dinosaurs.  Unfortunately there are very few different alien types in the game.  So even though you travel all over the galaxy, you’re likely to see the same foes again and again. 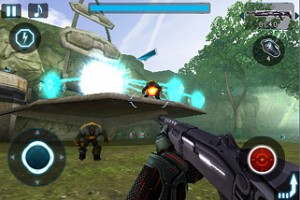 The controls are ok.  However, in some places it is almost impossible to turn quickly enough to not be killed or grabbed (some of the aliens can pick you up).  That brings me to one of my most hated parts of this game. The ubiquitous enemy pop-ins.  Like an old Nintendo game, if I walk 1 more foot I know another enemy will fall through the ceiling or magically teleport behind me in a room and begin shooting.  The publisher, Gameloft, has trouble with this in quite a few of their games (another example is Modern Combat).  Being shot suddenly from behind occurs throughout the entire game and can become quite frustrating.

Along with the enemy pop-in, there are other annoyances that keep the game from being as fun as it could be.  For example, as I run through a level, I may miss killing one or two baddies.  The game will allow me to go up the elevator, into the next room but not allow me to progress.  What’s wrong?  Oh, I get it.  I forgot to kill an alien and he is down the elevator waiting for me to kill him (literally).  Wow, how fun.

Once you leave the single player campaign, things do get a bit better.  The game offers the standard Bluetooth multiplayer and local Wi Fi options but it also offers online Wi Fi mode that allows you to play 3 other people around the world in 1 on 1 (on 1 on 1) death match.  For this mode, it uses Gameloft’s excellent online server service.  The game connects you quickly to an online lobby and I was able to connect immediately each time I tried a new game. Multiplayer offers several maps that allow you to see everyone at the same time.  Death comes quickly to those regardless of their skill.  You have the ability to use 6 weapons to maim and kill your opponents in any way you can.  This part of the game can be fun for a few minutes. 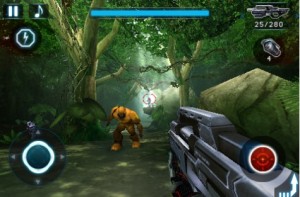 Unfortunately the only multiplayer option available is deathmatch.  It would have been nice to offer co-op mode (at least someone else could share the experience of that awful story) or team deathmatch.  perhaps these will be future additions but for now, you should get a good 30 minutes of enjoyment out of deathmatch.  Probably a lot more if you really like HALO.

All in all, NOVA isn’t necessarily a bad game.  I think it’s a bit disappointing that it wasn’t better.  When are we going to see story telling on the iPhone like we do in games like Half Life or Deus Ex on a PC or console?  If you play through the whole single player game and give multiplayer a shot, the game should give you a good 2 or 3 hours.  It also offers some achievements and other rewards for playing the game that will give some people enough reason to replay it.  Overall, N.O.V.A is decent in a pinch but I doubt I’ll run back to it anytime soon.