Rail Adventures uses a good premise for a game.  The setting: You’re an Indiana Jones-like character in a mining shaft on a rail cart trying to escape the “mountains before it’s too late.”  Along the way you can pick up gold, shoot monsters and jump over obstacles.  It has all of the makings of a fun pick up and play game but unfortunately the game doesn’t use its fine premise in an effective way and your left with a game that is frustrating and tedious. 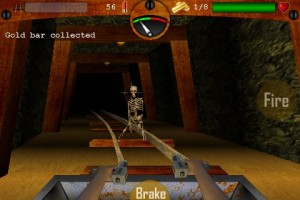 First, even though your cart moves quicker and quicker as it whips around railway bends, you are asked to slow it down by braking.  Slowing down the cart would be an ok gaming mechanic if there was something chasing you or the mine was going to collapse or something was going to happen that only allowed you a certain amount of time to escape with your life.  Sadly, that is not the case.  You can casually slow down the railway car without a worry in the world.  The lack of a time sensitive escape makes the game much less compelling than it could be and the escape action music ironic instead of fitting.

While escaping the mine, you have to kill skeletons, monsters, bats, zombies, etc and lots of them.  They stand directly in front of your path and you try to shoot them 6 or 7 times until you destroy them.  They don’t  move and the only thing that happens if you don’t shoot them 6 or 7 times is you run them over with your cart.  Talk about self preservation.  It would have been a lot more interesting if they could move and instead of a fixed crosshair for your gun (straight ahead), you had the ability to aim at least left and right.  As it is, it feels like something that was added on at the end of the development cycle.

Most damning though was after going through the first level in the game, I was instructed to replay it.  I received very little explanation as to why.  All I knew was that the game didn’t unlock the next level for me.  I restarted the first level thinking it would tell me what I did wrong or what I needed to do differently.  Instead it told me the same thing it told me the first time.  After playing the level yet again, I saw screen I missed the first time.  “You must collect all gold bars and have all percentages over 95% to help unlock the final level and over 85% to unlock the next level”.  What in the hell?  Instead of having a timed escape, the adventurer has some arbitrary percentages he has to meet.  This is without a doubt a game killer. 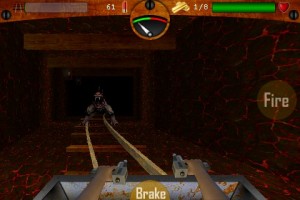 The game has nice music and the graphics aren’t all that bad but due to the game design, little else matters.  This game is good for all of 10 or 20 minutes because it doesn’t give you any reward for playing.  So is this game worth its $1.99 asking price?  Not in the least unless you find it fun trying to meet arbitrary goals and see the same level over and over again.  Think of this scenario;  You finally escaped the doomed mountain on your rail cart.  Wait, no I didn’t, you only jumped 80% of the objects in the middle of the tracks which obviously means you are doomed…doomed to play the same level again and again.  No thanks.