If your expecting to read about a watered down version of the console Call of Duty(by Activision) games, Modern Combat: Sandstorm is in every way, shape and form what you would expect it to be.  Its missions are so worn that I can clearly remember thinking, I wonder where the car chase scene is going to happen, and when the next level loaded up named, Death on Wheels, I knew I had found it.  It’s not so much Modern Combat: Sandstorm is a bad game, it just leaves you with a strong feeling you have done all of this before. 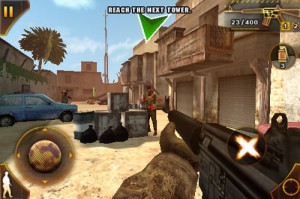 As with Gameloft’s other FPS, the graphics and controls are nicely done.  Unfortunately Gameloft decided to yet again try their hand at a story to go along with the action.  The storyline is pretty bad.  Some bad middle eastern guys want to destroy the west.,..and so on.  The storyline doesn’t hurt the game too badly but it’s unfortunate that their script wasn’t better.  After all, they took the time to create cut scenes and do bad voiceovers throughout.  At least give those guys something good to say.  Something other than the captain constantly calling his soldiers “knuckleheads” at every opportunity.

The controls work.  Nothing else to say really.  You are totally in charge of using two virtual analog sticks and everything works as expected.  Turning around can be a bit challenging but overall the controls are solid.  The music in the game is decent although nothing special.  The bullets, missiles, kill sounds, etc are all par for the course.  I know it sounds like I’m being lazy and not giving you the scoop but I’m serious, the sound is exactly on par with other iPhone FPS shooters.  Nothing more, nothing less.

The ai throughout the game is fairly standard.  Duck, cover, yell something Arabic sounding and shoot.  Most of them are dumber than bricks but the game throws a million at you to try and make up for it.  Dying repopulates you in the last checkpoint.  For me, this is really where the game’s value takes a tumble.  Sometimes the last checkpoint will be 4 or 5 minutes back in gameplay.  4 or 5 minutes isn’t a lot when you’re playing a console game but just several minutes at a time is how a lot of people play an iPhone game.  It’s definitely an issue.  Adding insult to injury, the checkpoint saves that are made by the game are not kept if you leave the game to take a phone call, quit or check your email.  This makes the levels, which average about 15-20 minutes, sometimes take 2 or 3 tries to beat even though you were near the end when you were called.  Imagine receiving a phone call, RING- 15 minutes of work down the drain.  Try answering that phone call in a pleasant voice.  “Hi honey” (through gritted teeth) all the while thinking in the aforementioned captain’s voice, “you knucklehead”. 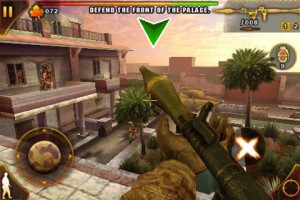 The single player game is fairly long and once you have completed it, you might want to check out the multiplayer mode.  Every time I tried multiplayer it didn’t connect very well.  Which was a bit surprising because Gameloft usually doesn’t have online connection problems.  Rather than put down a mode I wasn’t able to review, I’ll just I wasn’t able to review it enough to make it determinant in my overall score.    You can also unlock a tougher game mode but that is basically it.  For 4.99, Modern Combat’s value is middling.  While it does give you 3 hours of so of content, after the initial play through there isn’t anything left to see.  I would only recommend this game to people that have never played a Call of Duty game on a console or PC (all 3 of you).  For those of us who have been around the block a few times, Modern Combat: Sandstorm won’t give us anything we haven’t seen before and to add to that, this time it’s on a 3.5 inch screen.