It wasn’t long ago I heard that NFS: Shift would be coming to the iPhone.  Ever since, I have looked forward to seeing the type of adaptation it would get from EA Mobile.  The console game is universally adored and I went into this review hoping for the same, almost expecting to be disappointed.  Especially since EA Mobile’s track record has been mediocre at best.  So what did I find? 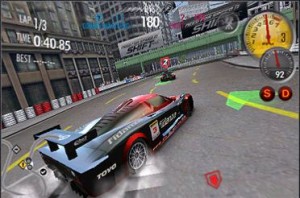 The game has quite a bit of content.  20 cars, 18 tracks set in 4 different locations.  All of the locations look different and all of the cars look great.  A definite plus.  I started out using a Mazda and stepped up to a Porsche and could definitely tell a difference in engine sound, handling, etc.  It’s nice to see that kind of attention to detail on the iPhone.

The sound is nice because not only do the cars sound great but you can also use your own iPhone playlist while playing the game.  It certainly was nice when I realized I didn’t have to listen to the crappy default rap/ alternative music EA included in the game.  Props to ea mobile for including this ability that sorely needed across the iPhone gaming landscape.

The controls are pretty decent, although in one game mode in particular they can become a problem.  In drift mode you are trying to rack up as many points as possible, not from racing competitors but from sliding around the track as much as possible.  It makes for fun gaming on a console but on the iPhone, it’s extremely difficult to get the tilt based controls at the right angle to drift for any length of time.  Fortunately after failing the first 10 times, I realize there was an option to increase the tilt effectiveness.  Once increased a few notches, drifting was much easier.  Nevertheless, it was frustrating as I wasn’t able to advance to the next level and I could see some people giving up and missing the rest of the game. 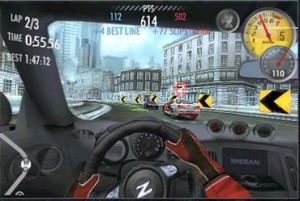 The actual design of the game makes racing a lot of fun.  Even when you lose a race, you can still earn stars and points for doing other tasks.  For example, you can still earn a star by beating the single lap record (stars help you advance to the next track).  The ai competition is so much better than Asphalt 5’s (read the review here).  Instead of ai that immediately catches up when they are down (in corny fashion), NFS: Shift’s opponents take advantage of you taking bad angles around the track or running off the edge of the pavement.  In my book, any game that can still give you a competitive race without using hokey ai practices deserves a second look.

Even with all of the good, there is some bad.  Other than the drift mode issue, I also have to question why in the world the game doesn’t have an in-game pause button.  Unless I am missing it (please let me know), I can’t find a way to pause the game during a race.  It’s a pretty big oversight in my opinion because there are so many times while using an iPhone game you need to pause for a moment or two.  Ironically, the game has a pause menu during the game that comes up when your battery is low.  Someone, please tell me I am just an idiot and where I can find it during the race!  (This issue should be edited out but I will keep it in for people that may also have trouble finding how to pause the game.  In the comments below someone mentioned that you can use two fingers on the screen during the race to pause it.  Very helpful!) 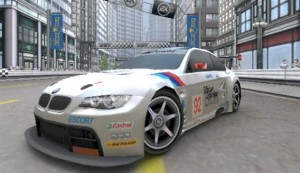 All in all, you are going to definitely get your money’s worth with NFS: Shift.  In fact, I would say it is one of the best iPhone games out there.  Despite a couple nagging problems, the amount of time and fun you can have with this game makes it seem incomprehensible there are so many 50 dollar console games that give you 10 hours or less of play.  BTW, I didn’t mention multiplayer which is also included as with both Bluetooth and local Wi Fi modes.  Both worked well when I tried them but even if multiplayer wasn’t included at all, this game would be a must buy.