The Simpsons Arcade is a 2d platformer.  It looks a lot like Double Dragon or Contra on the NES with updated Super Nintendo graphics.  Neither is necessarily a bad thing.  All of the usual cast members are here and despite a few nagging issues the game can be a fun time waster, albeit a bit short.  You play as Homer.  The storyline is so dumb that the developers themselves mention that you have probably already skipped reading it.  This game really isn’t about the story; instead it’s about playing an old fashioned 2D fighting game as modern America’s favorite cartoon character. 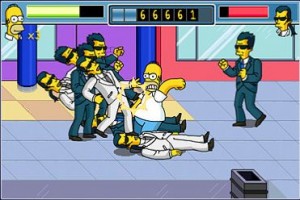 The controls of The Simpsons Arcade are like you would expect on any old NES game.  You have the virtual joy pad on the left and two virtual buttons on the right.  I never really had any problem with them at all.  The graphics are also what you would expect to see from a game of this type.  I remember a Simpsons NES game that came out in the early 1990’s that looks surprisingly similar.  There are six different levels in the game, each with its own feel, bosses and henchman.  Each level has 2 or 3 different bosses even a modest Simpsons fan will easily recognize from The Simpsons television show.  Overall the graphics do their job but they aren’t anything special.

The sound of the game is pretty decent.  Since you play with Homer, you’ll get to hear some familiar “mmm” sounds throughout.  However, none of the bosses that you fight actually say anything vocally. Instead they ‘speak’ through captions and only the Simpson family members ever utter a word.  It certainly would have been nice to hear what they said instead of reading it.  After all, few things are more recognizable than the voices of our favorite Simpson’s characters.  The music is pretty decent throughout the game and avoids the pitfall of being unbearably overused.  Also, EA Mobile again gives you the possibility of using your own music catalog as well during the game.  As with NFS Shift, this was a nice addition.

I did have several problems arise during my play through.  One persistent issue was that even though the levels last 15 minutes or so, there are no save points.  So if you are hoping to stop the game to make a call or get an email, you’ll be starting the level over after you load the game back up.  Another issue I had come up once during my play through is that 10 minutes into a level, one of the henchman became invincible.  The game would not allow me to move on until he was dead but since he was impossible to kill, a restart of the level was the only answer.  After playing a 10 minute level or so it was disappointing to have to restart the level from the beginning.  I do want to mention that I never had that issue come up again in my play through.

The basic game play is fairly repetitive.  Kill a bunch of henchman and move along.  There are some weapons to use including a boomerang, baseball bat, etc and Homer can do 4 or 5 different fighting moves but there aren’t any big surprises.  I played the game without sound for a while and actually became very bored with the game play.  I recommend playing with sound on since even though the fighting is simple, the sound adds quite a bit to the environment in the game.  One nice thing is that most boss characters have different weaknesses and strengths and figuring them out can take little trial and error.  The game’s difficulty is pretty well balanced throughout.  Expect to die some but not too much.

Other than the single player missions, of which there are six, there is absolutely nothing else to do in the game.  There are no achievements, nothing to unlock.  You can replay the game and try for more points but overall there is very little replay value.  All six levels may take you 90 minutes or so in total.  It seems like slim pickings for premium priced game. That being said, if you are a Simpsons enthusiast, you just might feel the $4.99 price tag is warranted.  For everyone else out there, you might want to wait until the game goes on sale for 2 to 3 dollars which is a more reasonable price.