For me, Shaun White Snowboarding: Origins was a welcome sight in the app store.  Both the skateboard and snowboarding genres that are both so popular in the console gaming world have been noticeably sparse in the appstore.  This game is a decent start.  A game like this has quite a few challenges for a mobile device since even on the console, the controls can be challenging.  On a virtual stick, a developer needs to give the player enough variety when it comes to tricks and moves but at the same time keep things simple.  For the most part, this important aspect of the game is a success. 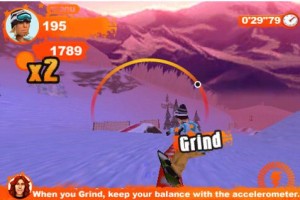 Loading up the game you can see right away that the game modes are few.  A single player free play mode coupled with some ghost competition options.  If you aren’t familiar with competing against a ghost, imagine competing against you or a friend’s replay of an existing run down the mountain.  The end result is you can see what they do, when they do it, giving you a sense of real time competition despite the lack of true multiplayer.  This mode is welcome but unfortunately doesn’t make up fully for the lack of Wi Fi or even the ubiquitous Bluetooth multiplayer support in the game.

Once you do get into the game, you will likely find the controls easy to learn and quick to respond.  The trickiest (and often the most frustrating) part of this game is trying to make as many moves as you can while going down the mountain and not timing the landings correctly resulting in a crash and a loss of all of the points you made during that jump/series of tricks.  However, since the controls are easily learned, practice should help quite a bit.  The game offers 4 different mountains to go down with each having a different layout and course.  The game integrates with an online community that allows you to track your progress as you go.  The achievement system is really fleshed out and there are quite a few to keep you busy.

The graphics and sound of the game are both fairly decent.  It would have been nice to be able to listen to your own music catalog as you push yourself down the mountain side but that’s a small issue.  The graphics do tend to be glitchy at times and occasionally you fall down the side of the hill and get your head stuck until you hit the jump button but thankfully it doesn’t happen too often.  The rest of the environments in the game are fairly pretty and the player models vary a bit as well.  This game isn’t going to throw all of your friends into an uproar about the graphics but they are more than serviceable.

The game gives you the aforementioned 4 levels and also includes several different characters with varying ranges of abilities.  Some are quicker, a few are better at tricks, etc.  The real shame is that this game offers no customization at all.  You can’t create a new snowboarder and nor can you take part in career events, earn money, etc that are all part of most games of this type.  For me, that was a pretty big letdown as a lack of career mode means the replay value for this game is fairly limited.  Even more bizarre, the game doesn’t include any races at all against ai opponents.  Just the ghost racing mentioned above.  It seems like this would have been an afterthought for most games of this type but here it isn’t even included. 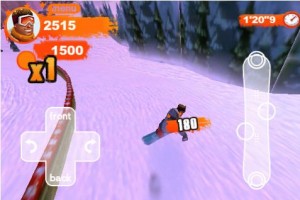 Overall, this game is no dud.  It has good controls, nice graphics and is pretty fun when you learn to piece a bunch of tricks together in a row.  However, if you are looking for live racing, multiplayer, customization of characters, or a ton of replay value on the virtual mountains of the world, you may need to wait for another snowboarding game to come out.   I have a feeling this isn’t the last Shaun White game we will see on the iPhone and that’s not a bad thing.