I came late to the Doodle Jump party but since I started playing it just now, I wanted to write up a few quick thoughts.  The game is remarkably simple.  One of my favorite things about the game is that you only need access to one hand to control your on screen character which makes it nice for guys like me trying to feed a baby with the other hand. 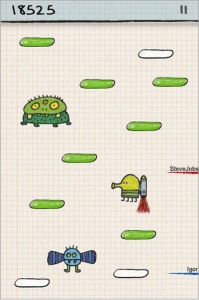 The idea of the game is that you use a weirdly shaped cartoon character that jumps from platform to platform indefinitely earning points along the way.  That’s it.  In the way stand flying monsters, black holes, ufo’s and the constant possibility of missing a level and falling.  To control your character, you simply hold your iPod Touch or iPhone upright and tilt it.  There is only one button on the screen at all times.  You can push to shoot the monsters to ensure a safe route upwards.

Throughout the level jumping, there are several fun pickups to make your ascent faster.  Items like rocket packs, hats with helicopter blades and spring shoes make the game more interesting.  Along with the powerups, springs and trampolines attached to the platforms add another way to jump higher and faster. 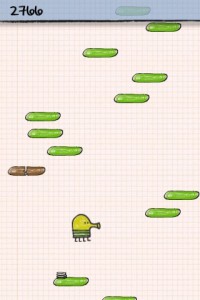 In another game, all of this jumping could get boring pretty quick.  In this one, it just feels fun and if you need to waste 3 or 4 minutes at a time, this game will make it go a lot faster.  The graphics and sound are perfect for this game.  The games recent update even gives you a transformed graphic set that allows you to play in winter.  The game keeps quite a few statistics like your average score, how many games you played, and many more.  The game also allows you to see how many hours’ minutes, etc you have played the game.  For me it’s a scary big number indeed.  If you don’t own this game, go buy it.