Tap Jockey has all of the makings of a fun game.  The setup: You are a jockey that picks a horse to ride.  Upon starting the game, you pick the difficulty level you would like to play.  Once you pick a level, you are taken to a screen with 5 different horses that each have a different color and name.  On the right side of the screen you are given the opportunity to add 15 points to 3 different attribute categories (speed, stamina and sense). Upon moving to the next track, the game gives the player additional points to spend for any of the three categories.

Once you have given your horse all 15 points you are taken to race day.  There are 6 different race tracks available within the game.  You must win the previous track in order to move to the next as so you cannot go back and play the 4th or 5th track without going through the rest.  Each track has their own requirements for advancing to the next race.  For example, maybe you have to be in the top 3 in one race and the next you need to finish in the top 2.  The actual action on race day consists of tapping one of three buttons that will make your horse move faster.  Once you bring him up to his maximum speed, in order to keep him there you need to time your button tapping to maximize your speed.  Basically it works a lot like Excite Bike’s turbo button.

The graphics are fairly decent.  You can certainly tell you are racing 7 other horses at once and there is no slow down on my 3GS.  The sound could be better.  As it is, it’s extremely minimal and doesn’t really give you the atmosphere you would expect at a horse track.  The controls work ok but any time you have a rapid tapping game on the iPhone, it isn’t the same as you would find on a control pad.  Sometimes it’s hard to tell whether or not you are tapping a button at all.

The game really has a lot of potential and that’s why I was so sad to see a lot of things missing.  Once you begin a career, if you lose a single race or mission, you lose not only the race but all of the information about the horse you created and have no chance to retry.  It would have been nice to be able to save the horse and his stats you created but there is no save at all.  As it is, it feels like the strategy of picking the horses attributes doesn’t mean a whole lot because you’ll be starting all over again the next time you load up the game. 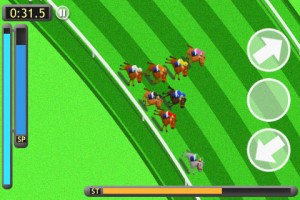 The game also lacks when it comes to sharing your score or having an online community to see how well you did compared to others.  The only stats the game keeps are each tracks best times.  By now, most games have some way of comparing your times and scores to the rest of the world.  Finally, this is a horse racing game without cash awards, odds, or even the ability to name your horse.  It would have been nice to be able to place a bet on each race and keep track of your career winnings (but first there would have to be winnings given for winning the race).

I hate to be so tough on this game because it is fun but it could have been a lot more.  This game may be worth it for ardent horse racing enthusiasts for $1.99 but for those of us that want some more depth to our games, it might make sense to hold off until its closer to a dollar.  Update: I do have to warn you about something I recently read.  If you have a 3rd Generation iPod Touch you may want to hold off.  I have heard this game doesn’t load right at this point.  More info as I hear about it.