I just beat the campaign mode in Trenches, the new game from Thunder Game Works.  My first thought was that I was sad it ended so soon.  The gameplay of Trenches is a lot of fun, the graphics are clean and despite a few control issues, this game is a must buy.  Sorry for ruining the surprise.  For those of you still looking to read a 600 word review, please read on. 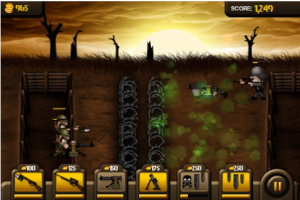 The idea of the game is a lot like a tower defense game but with a twist.  The twist is that the game is set during World War 1 (I am thankful beyond belief it wasn’t set during the much overused WW2).  You take the role of a British commander who needs to push back the Huns (Again, I’m so glad it’s not the Nazis for once).  In that role, you have different troops at your disposal, each having a different weapon to use.  That arsenal slowly builds as you go through the campaign which is composed of several levels.  You start with just a basic rifleman at your disposal and eventually are able to add machine gunners, artillery, mustard gas, and a couple of others.

The real gameplay comes in when you try to push the Hun back.  You are constantly trying to move forward but the Germans have other ideas.  It’s an epic battle of tug of war.  You could be moving ahead fairly easily and all of a sudden too many of your guys get bunched together and all of a sudden – BOOM – you get blasted to hell by the German artillery.  Even on medium difficulty the computer gives you a good challenge.  As you push forward, you can climb into trenches, which if you know anything about WW1, you’ll know how tantamount they were to the great war of attrition.  The game allows for multiple strategies for moving forward and all the while it times your assault as well as giving you achievements using OpenFeint to compare yourself to the rest of the Trenches community.

There are a few issues in the game but no showstoppers.  While the game is a 2d side-view, thinks Super Mario 3 on the NES, you need to be able to move the camera ahead so you can see the oncoming German assault and to move your troops effectively.  To do this the game requires you either tilt the phone to move the map back and forth or to click on the sky on the map and drag it forward.  Neither option is great when it comes to moving the map but the dragging functionality which is on by default is the best option.  The only additional complaint I can lob at the game is that is a bit short.  It took me 23 minutes to beat the campaign but the game isn’t without replay value.  It includes multiple achievements you can go after, a hidden sub-game you can unlock, and more substantially a skirmish mode that allows you to create your own battles with varying characteristics and difficulties.  Heck you can even fight off an incoming horde of zombies.

Overall, Trenches is a first rate game.  It’s great to see a whole new setting for a tower defense game, all the more so because of the professional manner in which it is done.  In a future update the developer plans on releasing multiplayer mode so you can battle your online friends.  Even without that mode, get this game now while you can at the $1.99 price point.  It’s really worth it.