A series like the Sims is so ubiquitous that is really difficult to not go into any review without preconceptions of what features and functionality it should have.  After all, the first iteration of The Sims came in 2000.  10 years later the newest iteration of that game is still selling like hotcakes and its popularity has only slightly waned.   How can an iPhone game like Sims 3 live up to the idiosyncrasies, the detail and the personality you can find in the PC game of the same name?  Surprisingly, fairly well. 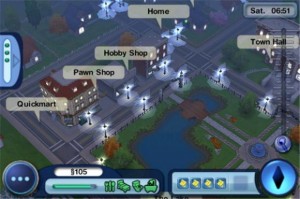 The game starts with you customizing a character to use within the game.  The customization is decent considering it’s the first iteration on the iPhone.  You have quite a few different face models, clothing options and hair styles you can pick from.  You can also modify your character’s race, eye and hair color.  Once you have set up your character to be as aesthetically pleasing (or displeasing) as possible, it’s time to pick the personality types you character will possess.  These can be traits like shyness or even sleaziness.  While the game has quite a few options for customizing and creating your character, it’s nowhere near as comprehensive as the PC version of the game so don’t go in expecting quite as much.

Once you’re finished customizing your character, it’s time to jump into your new virtual life.  The first thing you’ll notice is that the graphics are pretty good.  Surprisingly they are up to par with the Sims 2 in many ways.  Most importantly you have full control of the camera to zoom in and out and pan around in 360 degrees.  The controls can take a bit of getting used to, especially the panning, but after a while they become third nature (not quite second nature).  The character models as well as the rest of the game world have a nice look and feel and if you have played either Sims 2 or Sims 3 on the PC, you’ll feel right at home on the iPhone/iPod Touch version. 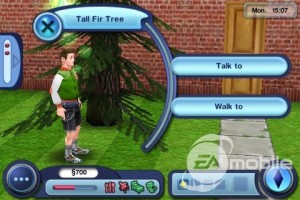 Your virtual life includes doing a number of basic chores like eating, bathing, sleeping, etc but this is fairly standard for a Sims game.  Thankfully the frequency of these arduous chores has been turned down quite a bit in this game.  Your first task upon loading up should be to go into town.  The town has a variety of shops and attractions.  It is also the place you will go to find a job.  There are a number of vocations available in Sims 3, though a few more would have been nice.  Both sleeping and work time are handled fairly nicely by the game.  Simply go to work or go to sleep and the screen will fade out and fade back in when it’s time to wake up or it’s time to leave work.  It’s too bad real life doesn’t work so easily.

Many of the other communication actions you are able to do in the PC/console versions of the game are here as well including talking, romancing, gossiping, woohooing, etc.  However, there are quite a few actions missing.  For example, you won’t find star gazing or staring at the clouds as an option in this version of the game and there isn’t any slapping or hacky sack playing either.  The amount of items you can buy is also severely limited in game.  And if you’re looking forward to customizing your house and building it your way, you won’t be happy with Sims 3 on the iPhone.  There is no custom build mode in the game.  You can hire a company to upgrade your existing house but that’s the extent of what you can do when to customize your house. 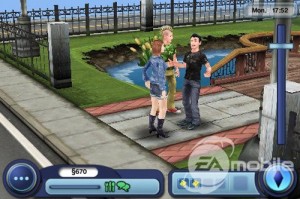 Overall though, the game offers a lot.  I haven’t even mentioned the fishing, farming, cooking with recipes, etc that are part of the game.  They were rally able to pack the game with both the look and feel of the PC version and that’s no small feat.  If you’re a Sims fan, this game is great on the go.  If you never really liked the Sims in the first place, this game probably isn’t going to change your mind.  One thing is sure; this won’t be the last version of The Sims for the iPhone/iPod Touch.