It takes a special kind of person to have not heard of Avatar.  The movie is everywhere, its licensed games, ads, and toys make it hard to go anywhere without falling over them.  Over a billion dollars made at the box office in just about a month.  Maybe it will surprise you then that I haven’t seen the movie.  Nevertheless, I have played the iPhone/iPod Touch game and I have some impressions. 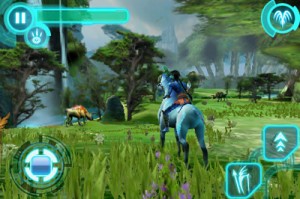 This game has some type of weird storyline that I couldn’t follow at all.  Perhaps it is based on the movie’s storyline, but maybe not.  Anyway it sounds like you are a soldier that becomes a hybrid of a human and a Na’vi (blue aliens).  Along with looking the part, you now have the alien race’s body and skill set (or something like that).  In that role you go to different places throughout the alien world named Pandora and fight off the many enemies in the process.

Avatar’s gameplay revolves around you using your amazing Na’vi skills to kill wild beasts in the jungles of Pandora.  You hack and slash your way through the world.  You have the ability to use several different weapon types within the game, including a bow and arrow type weapon which is pretty fun.  Your character can perform some pretty amazing acrobatics and sometimes all of the action reminds you of a Tarantino flick, only on a really bright world.

The sound, along with the graphics are well done.  The score from the game is well suited for a science fiction based action game and the graphics are very clean, bright and plush with life.  The frame rate rarely, if ever drops on my 3GS.  Character models and beasts/monsters are also very well animated and overall the game feels fairly polished when it comes to the graphics and sound.  To be honest, It’s not really a surprise as Gameloft usually excels in these departments in their games. 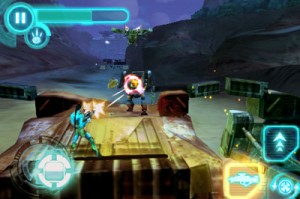 Unfortunately the part they usually don’t excel in, the actual gameplay is again a mix of good and bad.  While the gameplay feels pretty lively, the game’s camera is not up to par.  In fact the camera is truly horrible.  There are times when you feel like you have no idea where to go and there is no way to direct the camera backwards.  Unfortunately all camera movements are performed automatically by the game.  Sometimes you will be attacked off screen by a beast and you won’t even see them because they aren’t in your field of vision.

The game’s difficulties don’t end there.  This game is a plat former in the mold of Tomb Raider.  Like Tomb Raider there are jumping and climbing puzzles galore.  Also like early Tomb Raider games, the controls are very difficult to use when jumping.  Since the camera doesn’t follow directly behind your character all of the time, judging the distance you need to jump or the direction in which you should jump is made much more difficult than it needs to be.  One saving grace is that the game does create quite a few checkpoint saves along the way.  However it can be pretty annoying to do the same jumping puzzle for 15 minutes. 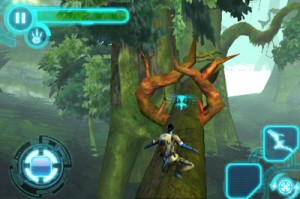 The controls are a mix of virtual d-pad and on screen action buttons that offer several different functionalities.  All in all, it’s a good system for movement.  This game also offers quite a bit of content.  It took me about 6 or 7 hours to beat it in full and you end up going through about 15 levels.  Though there are quite a few levels, many of them are similar and again, there are far too many jumping puzzles.  One nice thing I can say is that even if I wasn’t playing this game for a review site, I would have tried to finish it.  The gameplay of Avatar is usually satisfying enough throughout that I can partially overlook some of the camera issues. 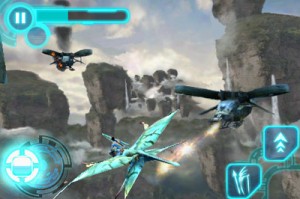 With its lengthy campaign, pleasant graphics and sound I am going to suggest this game is worth it if you can get it for $5 or so.  Unfortunately it is priced a bit higher at this point but when it comes down during a sale you might want to take a chance with it.  The value of this game is that it gives you a ton of content and the action within it is a lot of fun. If your OK with looking past some of its issues, then you will probably have a pretty good time playing it. To me, it is obvious that with this game, Gameloft made a better effort than in past games (NOVA for example).  Next time out I hope they can do even better.