Card Drop is a playing card based game where the object is to stack your cards (the five cards at the bottom of your screen) onto four different moving cards. For example, you can either stack a 2 or a King on an Ace, or a 7 or a 9 on an 8.  You get points for the amount of cards you have added to the moving card, and get a multiplier bonus when that stack moves off the bottom of the screen. 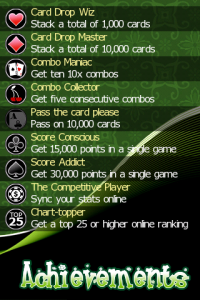 Like most excellent iPhone and iPod Touch games, the idea is fairly simple; it’s the execution that makes the game worth playing.  In this case, it is the motion of the bottom card that adds to the difficulty.  The gameplay revolves around touching and dragging one of your five cards to the column with the appropriate bottom card. As the game goes on the bottom cards move faster, giving you less time to stack on new cards. If your card doesn’t stack, you will hear a BUZZ sound and the card will return to the bottom. If the card does stack you will hear a BING noise and a new card will replace the card you just stacked. You keep stacking cards until time runs out.

The graphics are minimal but effective for this type of game. On the other hand, the audio is kind of a letdown. The sound effects are nice, but the background music becomes annoying after a few minutes. As we often say in these reviews, it would be nice to have the option of using your iPhone or iPod Touch music catalog during the game. 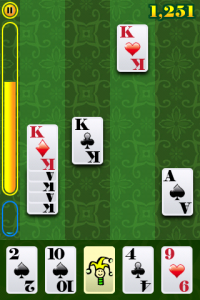 There are a few unlockable achievements within the game. Some are pretty difficult, for example, “Get 30,000 points in a single game.” In my play time, I was lucky to get 7,600 points as a high score but I’m sure you will do much better. I probably just need some practice. Overall, Card Drop is a fun game with a simple objective and uncomplicated controls. The replay value is directly proportional to the type of gamer you are. I can see some people really liking the fast action of Card Drop, while others may get bored with its repetitious gameplay. Overall, I believe this game will be successful for the same reason Solitaire has stood the test of time.  It’s a good time waster at a good price with a fun gameplay mechanic.