Battle Bears 1.5 is a really weird game.  Not that there is anything wrong with that.  In fact, its uniqueness helps set it apart from some games that play in a very similar manner.  What makes this game so strange?  How about the fact that you play a brown bear that fights off, with crossbows, machine guns, and the like, a never ending hoard of cuddly pink, blue and orange bears who want nothing more than to hug you?  Does that strike you as a bit different?  Or maybe you would consider it strange that when you kill them, the advancing bear’s heads come off and a rainbow shoots out instead of blood. 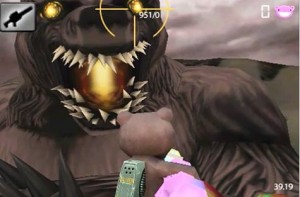 If after reading those beginning paragraph you are already ready to buy this $.99 gem, I don’t blame you.  On the other hand, if you are shocked and offended, this might not be your game.  Basically the gameplay during the story mode revolves around you shooting/killing the advancing bears in any way possible.  You have quite a few weapons at your disposal.  You will only be responsible for standing in a spot surrounded by sand bags, no need to move around and shoot.  In some ways, think about a messed up version of Duck Hunt.

The controls are simple to get used to.  Basically they are just the normal virtual pad controls you find on any shooting game.  They work well and since you don’t have to move and rarely become frustrating.  The graphics are hilarious.  They really are something to see.  The animations along with the cut scenes, oh yes-there are many cut scenes, will likely astound you throughout the entire story mode.  The cuts scenes especially are extremely bizarre but again it adds to the game’s character.  One thing you can definitely say after watching the cut scenes, these were not made by Gameloft (whose cut scenes are always a rip-off of some console game).  In my opinion, that’s a good thing. 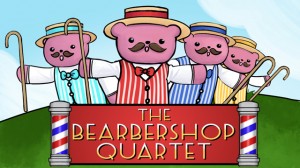 The sound within the game will likely make you laugh more than once.  I know it did for me.  Bad bear puns are thrown in throughout and pronounced by the characters enthusiastically.  You’ll hear things like “bearzooka” and “Bearbershop Quartet”.  Simply ridiculous but something about it is really charming.  The music sounds a lot like an action movie and is done well throughout.  The sound in this game is one of the best uses of sound I have seen (heard I mean) out of an iPhone/ iPod Touch game.

In between levels you have the ability to add more ammo to one of the weapons or to rebuild your defenses.  The strategy adds a nice touch to what would otherwise just be a shooter.  Throughout the game saves are made frequently so even if you get hugged to death (yep, that’s actually what happens), you can still go back to the place you were at.  The same holds true for an interrupting phone call or needing to quit the game.  Both of these are nice touches. 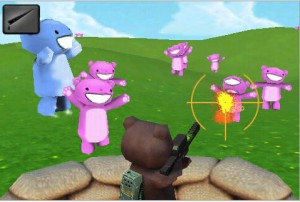 Besides the story mode (which has 3 different difficulty settings) which will give you a good hour of playtime, the game also gives you OpenFeint community achievements and a survival mode.  The survival mode, which involves you trying to survive wave after wave of cuddly bears, allows your scores to be tracked using the aforementioned OpenFeint and post them for all to see.  Overall, Battle Bears 1.5 is a good fit for most anyone with an iPhone/iPod Touch.  The bear killing, maiming and unicorn horn shooting (yep, you do this too) should be experienced by anyone that has a bit of a dark side to them.