CatchMe! If You Can

The development studio ODD1 deserves some kind of award for including not one, but two new ideas into their newest game, CatchMe! If You Can.  The gameplay is similar to Pac Man but the twist is that once you are caught, you become the chaser.  This is very well done within the game.  The second great idea is implemented in a way I have never seen before in a game, console, PC or otherwise.  But I’m getting ahead of myself.  Let me give you some background first. 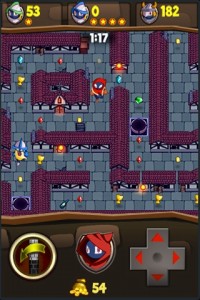 The game includes 2 different modes of play.  The first is a story mode where the bulk of the gameplay lies.  The second is more of one-off challenges.  You play a thief that’s job is to run through mazes, finding as much loot as possible and staying out of the way of guards trying to catch you.  The twist, as mentioned above, is that once you are caught, you become a guard chasing the thief.  The most interesting thing about this game is that during each of the 15 story mode levels, your main objective is to be the thief for as long as possible and steal as much loot as you can during a certain amount of time.  But as the guard you directly determine how much time and lot you will find as a thief.  This juxtaposition works great and I really dig it.  Each of the three guard types has a different ability to help you catch the thief while the thief has the ability jump over obstacles within the maze.

We haven’t even gotten to the one of a kind gameplay implementation.  The idea is that you have the ability to send all of the loot you steal to a community chest of sorts called the Band of Thieves.  Basically you and the rest of the Catch Me! If You Can playing world can send the money made to this chest and unlock premium content the developers have made.  These can be new challenges (the other game mode mentioned above) or additional content (presumably guard types, story levels, etc).  The idea of being able to work together with the rest of the world to unlock premium content is fantastic.  The only thing I question is how much the unlockable content costs (in thief dollars).  On average, you can make about 400 dollars or so per story mode level.  The first unlockable content costs 1,000,000 dollars.  As of today, about 80,000 dollars or so has been pooled by the players.  Personally I have added about 3 or 4% of that total.  My hope is that there is really an active community that can quickly unlock this content. 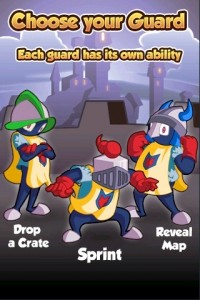 The game has one pitfall in my opinion and that is with its controls.  A game like this needs to have excellent controls.  After all, if you have ever played Pac Man you know how important it is to be able to move quickly from one maze opening to another.  First off the directional pad is on the right side of the screen which is extremely odd for a right handed player.  There needs to be an option going forward for the main directional pad to be on the left of the screen.  Secondly the game is played vertically even though it would make much more sense to play it horizontally.  It would be fantastic to have an update to add both of these options. 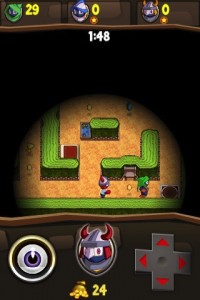 Even with the control issues, this game is definitely worth playing.  In fact, I really hate even mentioning those issues in the first place because everything else works so well.  The graphics, music, and sound are right on.  Premium content being able to be unlocked as a community is a great touch.  My opinion on this game is to buy it today, work with me to unlock some new free content and email the company and ask them to update the controls a bit.  By doing that, we all win.