Relix is a complex puzzle game but don’t hold that against it.  One of our favorite iPhone/iPod Touch games of 2009, Boxed In 2, was an intelligent, well thought out puzzling puzzler (thank you Dr. Seuss).  In fact, Boxed In 2 was iPhone Gamers Blog’s 5th best game of last year.  That game was also almost solely developed by Dennis Mengelt.  Why are these details relevant? Because Relix was created by Mengelt’s brother, Mark, and a talent for making good puzzle games apparently runs in the family.  Even better, Dennis helped create some of the challenging levels on Relix. 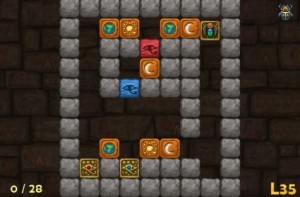 Relix is a tile based strategy game where you must touch like tiles to make them disappear. When all of the tiles are gone, you move on to a more difficult level. Simple right? Wrong.  Relix quickly becomes difficult due to breakthrough floors, portals, and trap doors.  The real strategy starts taking place when three of the same tiles are introduced in the game and must all be eliminated at the very same time.

The gameplay itself is very easy. Select a tile by touching it, then swipe left or right on the screen to move the selected tile. The three obstacles (breakthrough floors, portals, and trap doors) are easily learned through early levels of the game.  The developer does a nice job of ramping up the difficulty slowly so you don’t feel overwhelmed too quickly. 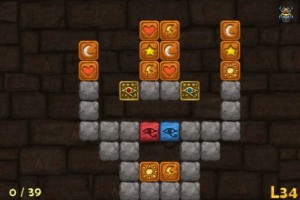 The graphics in the game are simple but well done. I like the hieroglyphic theme that is used throughout the game and menus.  The audio in this game is an addition, not a subtraction like you may find in other puzzle games. The background audio is also quite nice being catchy and not too intrusive. If you don’t like the background audio, you can even listen to your own iPhone/iPod playlist.

If you run into a level that you just cannot get past, have no fear, you can switch to a new level using the in-game menu.  You unlock levels by earning stars. You earn two stars by completing levels under the targeted amount of moves and one star for just completing a level in however many moves it takes you to get it done. The more stars you get, the more levels you unlock. To earn more stars you can go back and replay earlier levels that you may have only earned one star in. 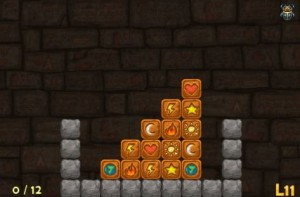 Relix really is a super addictive game! If you like a good challenge, at a fair price that will also keep your mind working for hours, this game is for you.