Doodle Bomb is a physics based, puzzle game where you must open doors by activating switches. True to its name, activating those switches requires that you throw bombs that must explode close to the switch. Obstacles like wheels, multiple switches, and rotating bomb shooters are added to levels to up the difficulty. To unlock new levels you must beat lower levels within an allotted amount of throws. 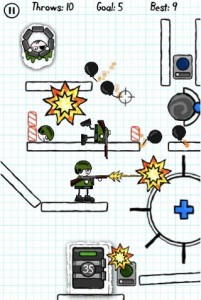 The gameplay is very similar to most physics games, think Ragdoll Blaster. To throw a bomb, simply tap the screen. The trick is that the farther you tap away from your hiding hole, the harder the bomb is thrown. An additional control feature that I have not encountered on any other physics game is that you are able to control the roll of the bomb by tilting the device. So if you throw a bomb and it’s not quite close enough to the switch you are able to roll the bomb closer.  It is a pretty cool design.

The graphics are just what you expect from a game with doodle in the name. However, even the doodled graphics are well done. The sound effects and audio are great. There is no overly intrusive music during gameplay and you can use your own music if you like. You get a swoosh when you throw a bomb, a click when the switch is activated, and of course an explosion then the bomb blows.  Simple, but effective. 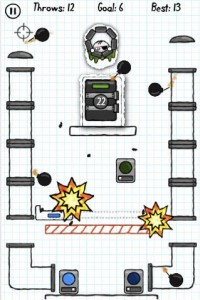 Overall, Doodle Bomb is a fun, addictive game that has amazing controls. It could use a few tweaks to its difficulty level early on, but the latter levels really step it up and make it a game worth playing.