Tetris is the very epitome of classic mobile gaming.  It’s no surprise then that the iPhone version came along quickly after the App Store opened.  What is surprising is how well this gem of a block builder has stood up to the test of time and how a new mode captures the same magic on the iPhone as the original Tetris did on the GameBoy.  When I recently read that Tetris has sold 100 million copies across all mobile phones (most of which are not Apple devices) since 2005 I knew right away that we needed to do a review in honor of that achievement. I’m very glad we did. 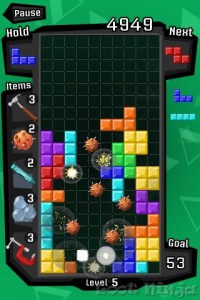 The basic premise of Tetris is to guide a series of differently shaped blocks that are falling from the sky into a combined single horizontal line row.  Once you connect all of the blocks in a single line, they disappear and you earn points.  In order to better accomplish this, you have the ability to turn the differently shaped blocks in several different directions.  The object of the game is to keep this up as long as possible.  As the game goes on, the blocks begin falling quicker, making it more difficult for you to turn them in time before they hit the floor.  I’m sure most of you knew the basics but I wanted to cover my bases.

The iPhone game continues with this old formula and it continues to work in spades.  A new mode was created for the iPhone/iPod Touch version.  This mode is called Magic.  The gist of it is that instead of just dropping the blocks into place, you have a variety of other options to destroy the blocks that made it to the floor.  For example, you can use a meteor or a hammer to destroy the fallen blocks.  Or as they are falling, you can use a crayon to redraw (very nice use of the touch screen) or pinch the block into a different shape.  This gives people a whole new way to play the game and it retains its charm.

The controls are extremely simple and the added touch screen options during the magic mode make the iPhone/iPod version of Tetris a treat to play.  The graphics are top notch, all of the colors are vibrant and easy to look at.  The music has been updated to include several new upbeat songs to play along to.  Better yet, you can use your own library of music.  If you’re ready for some heavy duty nostalgia, grab the original song, “Korobeiniki”, and set it to replay in the background. 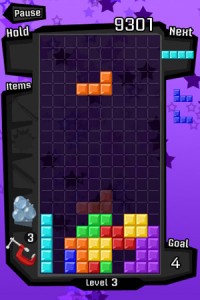 My wife started playing the other day.  She was a huge Tetris playing junkie back in the day, specifically on her GameBoy.  She said that the iPhone version was too easy; the blocks give you too long to rotate them before they fall into place and that the magic mode was simply ridiculous.  I couldn’t disagree more.  I love the pace of the game and I think the iPhone/iPod version hits the nail on the head.  But then again, I never really played too much Tetris back in the day.  I was more of a Tecmo Super Bowl guy.  So be warned Tetris purists, your mileage may vary, but for the rest of us iPhone/iPod Touch users, Tetris is a complete win.