Buy it. If you think you should read on, go ahead, but by the end I think you will be ready to make the purchase.  StickWars is a lot like some of the older flash games that have been around the net for a while.   The gist of the game is that you are trying to protect your castle from stick people invaders. You get to use god-like powers to help you protect your castle. These powers include, flicking the stick invaders causing them to fall to their death, casting meteors and fireballs, and capturing invaders and turning them into your own army. 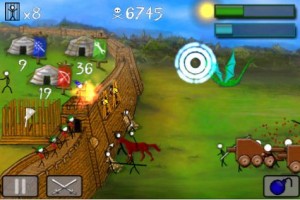 The gameplay is a lot of fun. At the beginning you don’t have enough money to buy an archery pit or bomb factory so it’s just your finger and the invaders. To defeat the invaders early on, you must touch and throw them upward. It’s not the toss that kills them; it’s the impact with the ground or each other that does it. As the game continues you start to earn more money. With this money you can buy upgrades for your wall or buy bombers, archers, or wizards. To use any of the last three you must capture invader by dragging them into a prison. After a short time the prisoner becomes part of your army that you can use to help protect your castle.

The graphics aren’t anything special, but come on…they are stick figures right? One really nice touch is that the game uses the sun rising and setting to show you how much longer the battle will last.  As it moves slowly across the sky and begins to set, you know exactly when the battle will end.  A very well implemented idea that could have been done in a much lazier manner (for example by using a digital clock).  The background music is good and quite catchy (I like the bagpipe parts). The sound FXs are good but as the levels go on, they can become a bit overbearing with so much going on.

The controls are all touch based with one exception, you can shake the device to release a bomb carrier, and then shake again to detonate.  As you move on to higher levels, the game confronts your castle with tougher forces.  Some of them require that you use different tactics to eliminate the threat.  Is it wrong that I really enjoy holding a stickman in the air, waiting until the coming forces arrive and then violently flicking my finger down to pile drive the stickman into the incoming army?  I don’t think so.  It feels too right to be wrong.

Overall StickWars gives you hours of game play. It’s very addictive and it seems that you never know when a new type of invader might be around the corner. Don’t miss out on this gem of a game.