DrawRace has one of the most innovative designs in the iPhone/iPod Touch world.  Instead of real-time racing, you are responsible for taking your finger and tracing the future route your car will take around the 2D track.  The added multiplayer component adds a ton of additional functionality and the end result is a one of a kind racer with limitless possibilities. 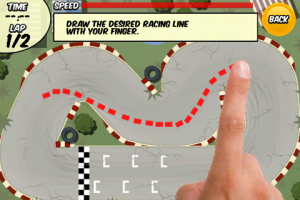 The game offers a large number of tracks, each of which is distinct.  For example, some are plain ovals, others are road courses, and even some figure eight tracks are thrown into the mix.  After picking a track, you simply guide your finger around the track using the best route you can come up with.  Again, you are not racing in real time.  Instead, the game saves the route you draw and depending how quickly or slowly you move your finger around straightaways and corners, your car will speed up or slow down.  Once you have drawn 2 or 3 laps around the track, the race begins and the ai follows your route exactly.  The first mode revolves around your car going up against a computer opponent.  If you are lucky enough to beat the challenging ai, it unlocks additional modes you can play at the track.  For example, you can upload your best time to RedLynx server and then compete with the car-based ghosts of the top times on the server.  You can also play local multiplayer; Just have a buddy or two draw their own best lines around the track and see up to 3 cars race each other on the screen at once. 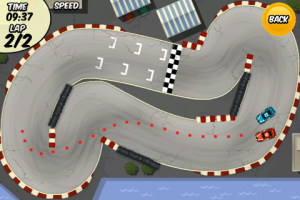 The actual controls take a bit of getting used to.  Drawing the lines are easy but the real challenge is how quickly to draw your finger around different parts of the track.  If you go too quickly around a corner, your car will drift which will slow you down and likely cause you to lose.  If you go off the track your car moves extremely slow. However, once you get used to the idea of your finger’s sliding speed changing the speed of the car, it becomes much easier.  The biggest challenge is that this is one of the only iPhone/iPod games out there that have this kind of control scheme. Its uniqueness causes early difficulties but it’s worth the payoff.

The graphics are your standard 2d.  Your car is red and your competitors are either green or blue.  It would have been nice to have a bit more customization when it comes to the type/color of your car.  Overall though, the graphics are clean and never detract from the gameplay.  The sound within the game is fairly simple.  Music is only played within the menu and isn’t turned on during the race.  It would have been nice to have either some music during the race or the ability to turn on your own music. 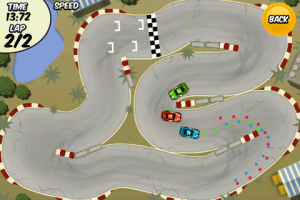 I don’t really have any issues with the gameplay, just an idea I would love to see implemented in the future.  Currently, the game has a maximum of 3 cars racing at once (this happens during 3 person local multiplayer).  Unfortunately there is no way of downloading more than one car from the server to race against at once.  It would be great to have the option of downloading 2 or 3 competitors from the server and having an all-out battle on the race track, Of course in the future, I would also like to see the ability to race 4 or 5 other cars at once.

DrawRace gives you the ability to race nearly an endless amount of competitors.  It has a large amount of tracks, each of which requires a different strategy to win, and overall it is just a ton of fun to play.  I love to see games that use new ideas come out on the AppStore and do well.  Buy this version now for $.99 and support innovation and at the same time have a ton of finger-tracing fun.